For Goodness Shakes got in touch with me and asked me if they could send me some of their products to try. I’d heard the name before, but I couldn’t picture their products or where I’d seen them. When I received them I immediately recognised them from supermarkets though and I think they’re actually widely available. I got sent two flavours – chocolate and strawberry. 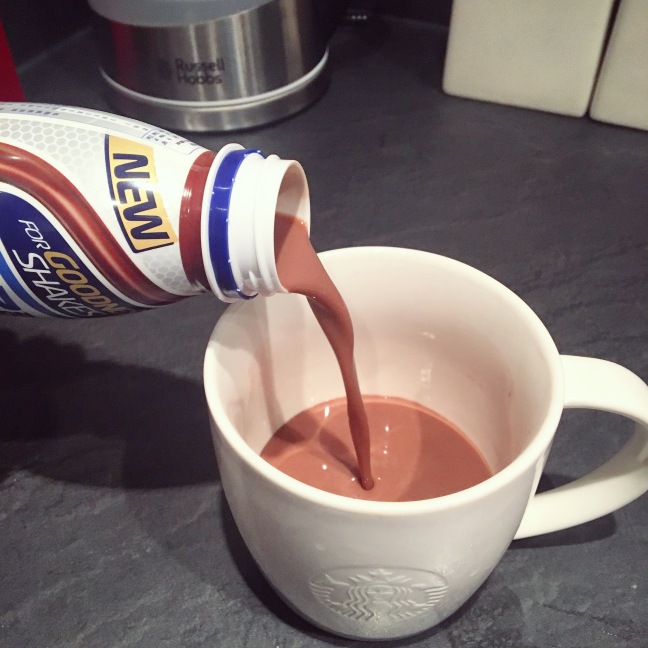 Obviously I went for the chocolate first. Chocolate is the way to my heart after all. On opening it there was a sweet, chocolatey smell – good start, obviously. There was the tiniest hint of the UHT smell you get with long lasting milk but of course there is – this stuff (impressively!) lasts for months. Next, the texture. They’re thick enough to be satisfying but not that horrendous, gloopy texture you get from Frijj milk. Anyone who’s had a Frijj milkshake must know what I’m talking about – it’s like I can taste whatever vile thickening agent they’ve used and I almost feel like I need to eat it as opposed to drink it! That’s not the case with these though – they’re a lovely texture.. and very drinkable 😉 Yes they could possibly be a bit thicker, but for a protein shake with such good nutritionals I was very impressed – they’re far thicker than any shake you’d make yourself with protein powder and milk. 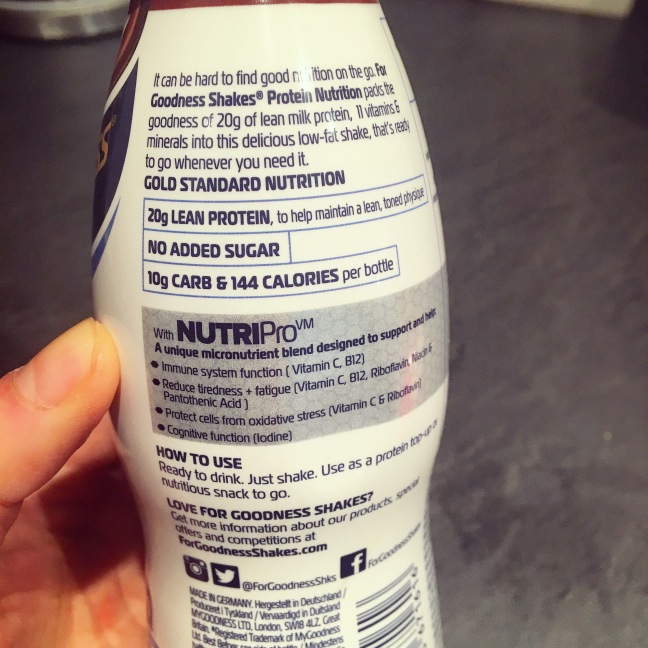 Finally, and most importantly – taste. They taste good. For the nutritionals they taste very, very good. There’s a strong chocolate flavour that doesn’t taste artificial or too sweet. I’m not going to say it’s the best tasting chocolate milk I’ve ever had, but of course it isn’t – firstly it’s a protein packed (as opposed to sugar packed!) milkshake and it’s also a UHT drink so of course it isn’t going to taste fresh. To be honest it would be completely unrealistic to expect them to – in the same way that you’d never compare UHT milk to normal milk it would be unfair to compare these to fresh chocolate milks. Compared to other UHT products I’ve had though this tastes just as good if not better – but with far better nutritionals – each bottle is packed full of 20g protein and has no added sugar (just 8g per bottle!). Just as they’re thicker than a protein shake you’d make by mixing whey and milk yourself they’re also far creamier and they taste much better than any whey I’ve tried which is obviously a clear win!

The first time I tried their shake I actually used it to cook my oats and it made them so thick, chocolatey and creamy – I definitely recommend trying it! 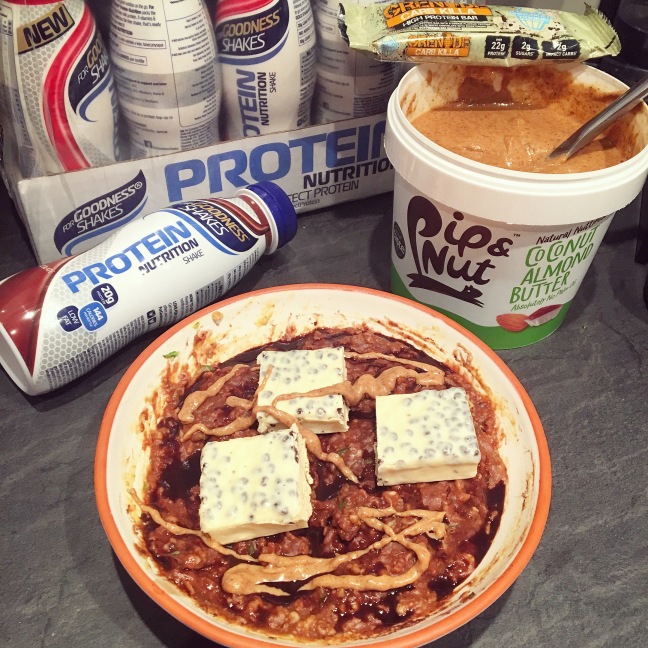 I also poured it into a mug and heated it in the microwave for a minute – a perfect, warming alternative to a hot chocolate. I often buy those hot chocolate sachets but I find them a bit disappointing – they smell chocolatey but they’re often quite watery and tasteless. These are much thicker and far more satisfying!

For those interested, the nutritionals for the chocolate flavour are 144 cals, 2.1g fat, 10g carbs and 20g protein per bottle. 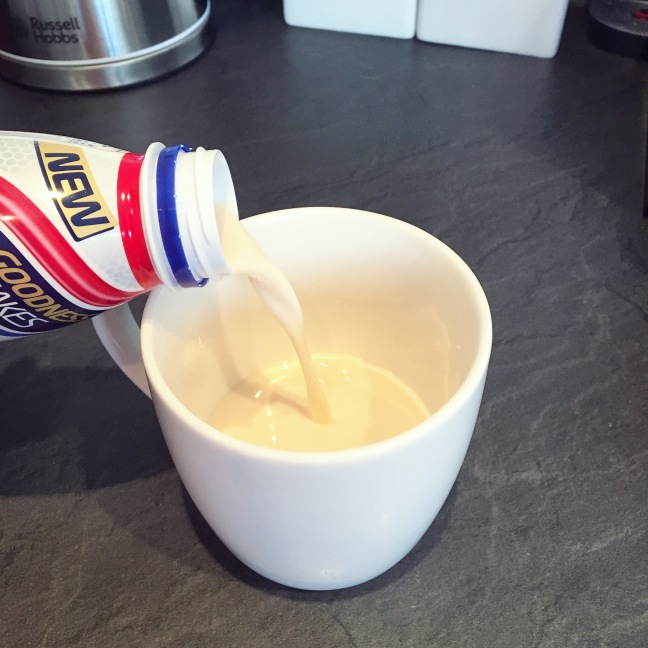 Next up was the strawberry, and I was very, very sceptical. Not because of the brand – I’d already tried the chocolate after all and enjoyed it – but I don’t really like strawberry as a flavour. Whilst I love the fruit, I often find strawberry flavoured things to be a bright, artificial (sometimes even luminous!) pink, with a strange taste which apparently the vast majority of food manufacturers have deemed to be “strawberry.” Ironic really, given that strawberries are in fact red, not bright pink. I’ve had it everywhere – strawberry ice cream, strawberry milkshakes, strawberry yogurt; even Kahve Dunyasi (one of my one of favourite chocolate/coffee spots in London) served me up a fluorescent pink monstrosity of a milkshake that couldn’t have been missed from space! On opening it I was pleasantly surprised. There was no ridiculously bright pink colour.. in fact there was almost no colour at all. It was the colour I think strawberry flavoured products should be and a colour which didn’t actually put me off drinking it immediately! Give me a choice of this or the supermarket version with the pink colour which everyone seems to want to associate with strawberry and I’d choose this any day. I found the flavour okay – probably as expected and more artificial than the chocolate. It wasn’t overbearingly sweet though which was nice. Did it taste of strawberry? Not particularly, but equally no less so than other strawberry flavoured drinks out there. In fairness I think fruit flavours generally are very hard to reproduce without using the fruit itself.

The nutritionals for the strawberry are similar at 125 cals, 0.5g fat, 10g  carbs and 20g protein per bottle.

Overall these are a great product – I think they’re well made, nutritious and good tasting. I liked both flavours but if I was buying them myself I’d definitely choose the chocolate (but of course I would – I’m a self proclaimed chocoholic!). Most supermarkets sell them and they’re a good option for a quick, healthy and satisfying snack or a quick and convenient refuel. Since they last so long and don’t need to be refrigerated they’re also great for travelling – you don’t have to find fresh milk or drag a shaker/protein powder around with you. They also contain a lot of vitamins and minerals. While I am one of those people that believes that if you eat a balanced diet with plenty of fruit and veg then you shouldn’t need to take vitamin supplements, they certainly aren’t going to do any harm and again if you’re travelling then often it’s likely that you’ll have very little control over what food you eat and often (in my case!) it may seriously lack nutritious choices so it’s a good addition to the drink in my opinion. I’m not sure I’d buy them in bulk but that’s a matter of personal preference as opposed to a reflection on their product. I don’t really drink protein shakes very often – I use protein powder for baking rather than drinking. If I was travelling or needed a quick snack on the go I definitely wouldn’t hesitate to buy one though – they taste good and I very much doubt you’re going to get anything more filling for 144 calories!