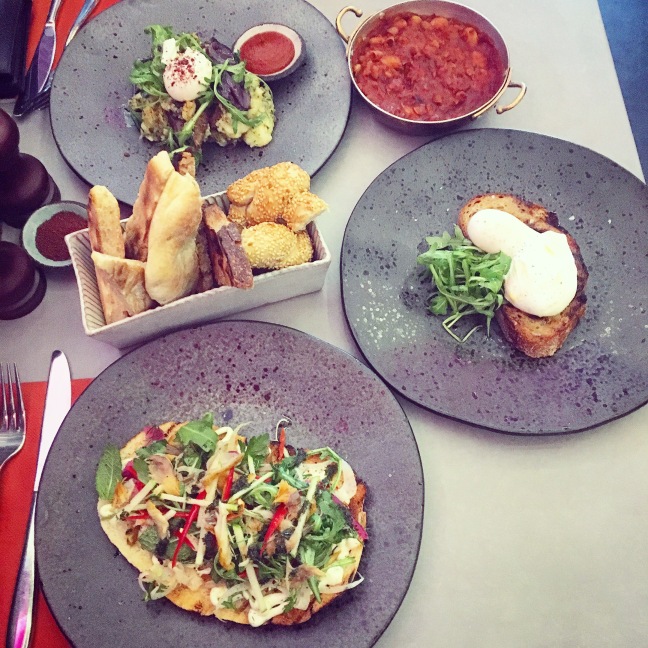 Firedog is* a newly opened Aegean restaurant open from morning til night serving up food all day and drinks in the evening.

*was – when I went.. seriously belated blog posts seem to be becoming quite a theme!

It doesn’t look that big from the outside but there’s a huge downstairs area which would be lovely to hire out as a group. The whole place is decorated beautifully – they’ve definitely gone for a relaxed atmosphere and it’s a lovely place to be. There was music playing quietly in the background while we were there and I can imagine groups spending hours taking their time over a long weekend brunch. 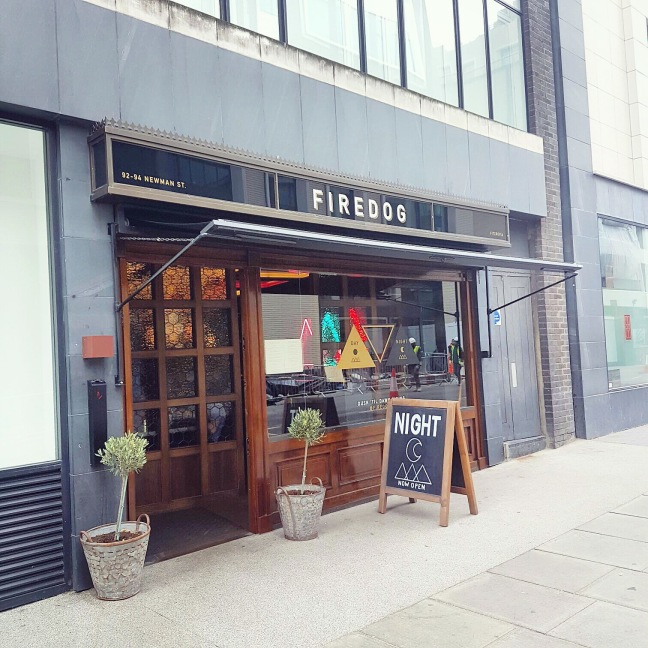 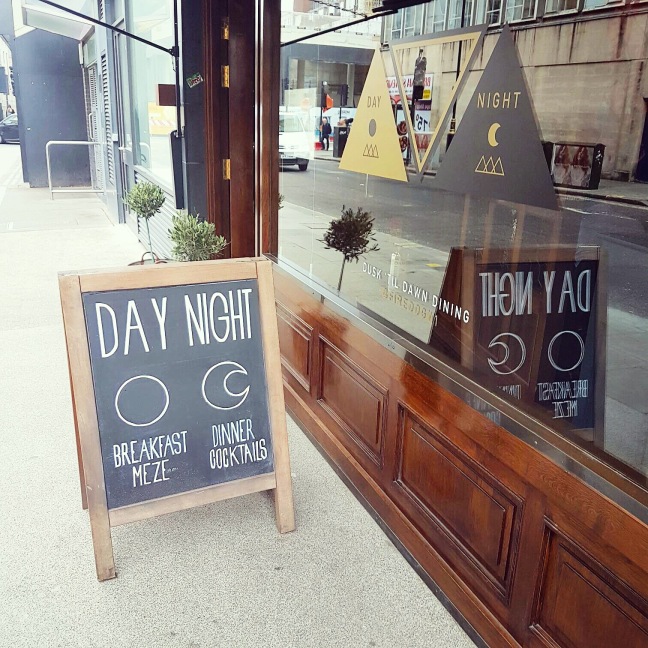 We went on Sunday morning and were given two menus – a combined all day breakfast and lunch menu (lunch served from 12 onwards) and a breakfast mezze menu. Obviously as an indecisive person I was drawn to the breakfast mezze which I think would be an amazing option if you’re in a small group (or with a less fussy companion!). The waiter said most people order that and then one or two brunch dishes to share – I guess you could see it as a starter, with dips, small salads and some meats and breads before ordering a main meal. I really wanted to try it but there’s a minimum order of two per table and Marcus unfortunately isn’t the best person to share with – he doesn’t like olives, the middle eastern style tabbouleh type mixes, or any kind of salad. He also doesn’t like aubergine, beetroot artichokes or veggies like that which are so often made into delicious Aegean dips, which pretty much left him with just a couple of items that he actually liked from the extensive list. The rest of the menu is amazing though so I wasn’t too disappointed – I had a hard enough time deciding as it was! 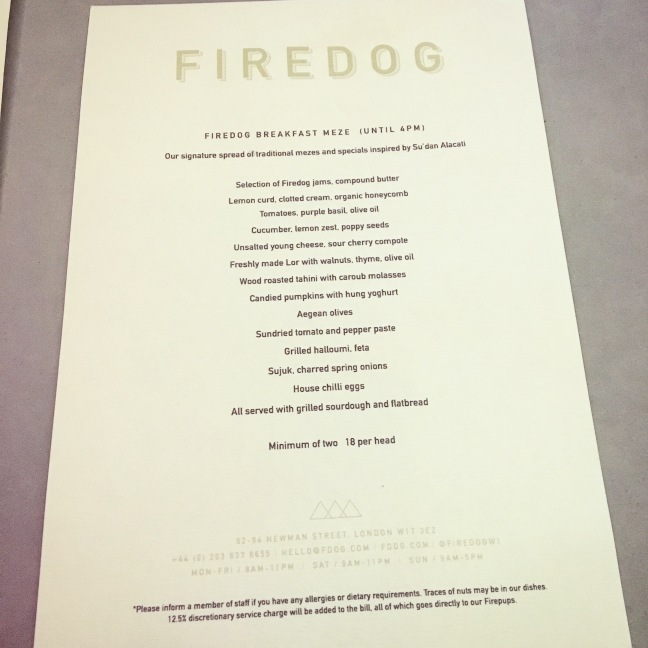 We started with flat whites of course, and they were beautiful. For mains I went for the X and Marcus chose the Y. We ordered more coffees to go with our meal – I went for an Americano this time. The coffee had a definite fruity taste to it and I wasn’t a huge fan of it, but I imagine most coffee lovers would enjoy it as it’s a taste I’ve encountered frequently at top London coffee shops.

Since their menu only mentions sourdough toast as a side I asked if we could at least have the amazing bread basket that I’d spotted another table having as part of their breakfast mezze and they were more than happy to let us have one. It came warm and the sesame twist bread was lovely with an incredibly soft filling – almost like a pretzel. We had to ask a few times for the butter and spreads though, which was slightly annoying as a lot of the bread had gone cold by the time we got them (and we all know how I feel about warm buttered bread!). The spreads were worth the wait; a lovely blackcurrant jam, a deliciously sweet (if slightly too runny) homemade strawberry jam and a creamy yet tangy lemon curd. The butter however, came rock solid, and was enough for about half a slice of toast – given the amount of bread we had I asked for a couple more portions but it still wasn’t nearly enough. And butter served cold and rock solid will forever be a pet hate of mine!

Of the two mains Marcus’ was definitely the winner. As I’m Not usually a fan of salami, chorizo and other similar cured meats I wasn’t expecting to enjoy it but the sujuk was like a delicately spiced lamb kofta, served up in a lovely hash absolutely packed full of flavour and topped with a runny poached egg. My dish wasn’t quite such a success – it sounded a lot more exciting on paper than it was on the plate. It was essentially a mackerel salad on a flatbread, which I think I would’ve really enjoyed if the flatbread hadn’t been crispy and dry. Whenever I see the word flatbread on a menu, I hope for a lovely fluffy bread; ideally thick but if not then at least soft. This was none of those – thin, dry and so crispy that every time I cut it bits snapped and crumbled off. The other breads in the basket (besides the sesame twist) sadly followed a similarly dry and crumbly twist. Luckily I had a fat slab of sourdough on the side – I’m not sure whether they just don’t offer eggs alone as a side or whether it got lost in communication but I ordered (what I thought was) a side of poached eggs and it came as a whole new dish. No complaints though as they were poached perfectly and the soft sourdough was the perfect addition to my meal (plus what is brunch without mountains of bread!?). I obviously wouldn’t advise ordering this as a dish alone though, delicious as it was, since it couldn’t have been much more basic. Save poached eggs on toast for the times when you unfortunately find yourself at a place (thankfully becoming more and more rare!) where the extent of the brunch menu stretches to poached eggs and hollandaise on a muffin – there are much more exciting options here. We also got sujuk beans as a side to share, when they finally came. I think the strangest thing about the meal was that they brought out our two mains with the bread but not the spreads or the sides. When we asked for them they looked bewildered, exclaiming “oh, you want everything together!?” Perhaps I could’ve forgiven them for not bringing the poached eggs since they’d clearly misinterpreted my request for a side as wanting a whole separate dish. But the beans? And the spreads!? Were they seriously thinking that we’d eat our mains, and dry toast.. and then eat some baked beans alone with butter and jam!? Or was it some poor excuse for having forgotten half of what we ordered? Baffling.

Unfortunately the service as a whole was memorable for all the wrong reasons. We were greeted by one waiter who was friendly, welcoming and happy to explain the menu and make recommendations but unfortunately it was all downhill from there – over the rest of our time there we were served by no fewer than four different waitresses. It wasn’t the number of them who served us that I had an issue with; it was the manner in which they did it. They hovered. Whenever they saw even an almost empty plate they pounced on it. They even randomly jumped in to grab the bottle of water and fill up my glass when I was mid reaching for it. We had to repeatedly tell them that we weren’t finished yet – there was still coffee in my cup or some jam left in the bottom of the pot. It was as if there was a shortage of crockery in the kitchen and it had to be rushed back to be washed up ready for next use. And for the love of good please let me at least finish chewing my final mouthful before asking if I’m done with the plate! Ironic really given how seemingly difficult it was to get some more butter.

For dessert we both wanted the chargrilled plums, kaymak, honey, salted pistachios and toasted brioche. I’m wary of ordering halve due to my peanut allergy and I did briefly entertain the idea of trying the panko coated rice pudding balls, but my love for bread prevailed (as always!) and having coincidentally watched a program on how kaymak was made just a few days before (it’s essentially a Turkish clotted cream) I was intrigued as to how it tasted. It was beautiful. Soft, velvety smooth and creamy – like a silkier version of our clotted cream – it went perfectly with the sweet plums which had been cooked down until they were melt in the mouth soft – even the skins didnt need chewing. The salted pistachios added a lovely texture and the brioche had a lovely char from the grill. The dish was presented beautifully too – definitely not something to be overlooked. In fact good presentation was pretty much a running theme throughout the meal. I absolutely loved the plates, bowls and mugs, the food was laid out faultlessly and the cutlery was spotless.

Unfortunately the whole dish was a little too dry though.. the menu said the dish included honey, but unless the pears were cooked in it I couldn’t see it anywhere and the brioche was crying out for some moisture. Following a similar theme to almost all of the other bread we were served, it was a little stale. Not nearly as dry as my flatbread, and the creamy kaymak/sweet plums went a long way to saving it, but had it just been served with a generous drizzle of syrup it would’ve been transformed from an okay dish to a bloody good one.

Overall it’s definitely an above average brunch spot in a great location with beautifully presented dishes, a unique and varied menu, a lovely interior and relaxing atmosphere. There were some lovely elements to each dish and the sujuk hash in particular was delicious. Although a few let downs and the far from perfect service would stop me from rushing back, I’d be keen to go with a friend who’d been keen to share the breakfast mezze, as part of me feels like I missed out given that that’s probably what they do best.

There was an error retrieving images from Instagram. An attempt will be remade in a few minutes.