For a chocolate lover like me, I genuinely don’t think I could imagine a more heavenly way to spend a weekend afternoon than having chocolate afternoon tea. I was lucky enough to be spoilt by one of my closest friends and taken here for a (very!) belated birthday present. We’re both so busy that it’s hard for us to find time to catch up, so spending hours chatting over tea, coffee and cake was absolutely perfect.

As you can imagine, being in the heart of Belgravia, R Chocolate is refined, elegant and so luxurious. It’s just a few minutes walk from the famous Peggy Porschen cake shop and is surrounded by beautiful town houses, a ton of amazing delis, coffee shops and independent cafes. From the outside it doesn’t look particularly spectacular – it has a pretty shop front but it doesn’t stand out amongst all of the other beautiful buildings around there. 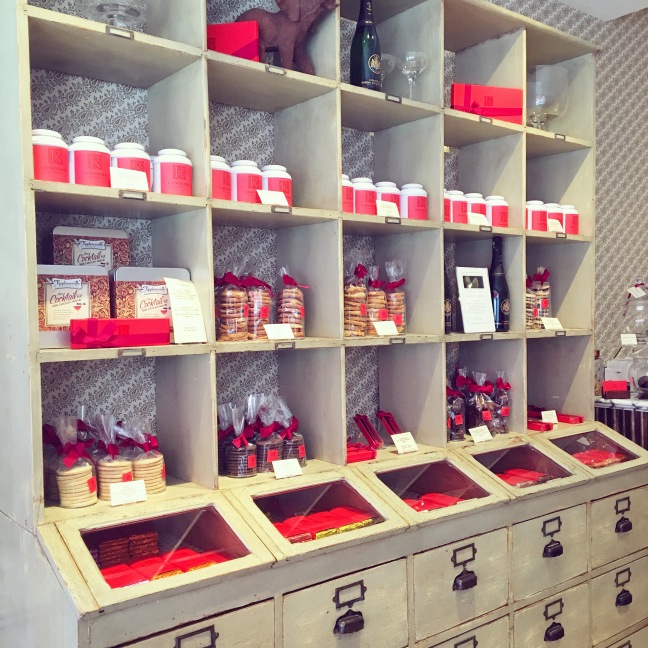 Inside it’s small but beautiful – simple but sophisticated with a stylish interior. As soon as you enter there’s a big glass cabinet showcasing all of their cakes, patisseries and chocolate. There aren’t many tables so it feels exclusive and we were actually the only people there having afternoon tea at the time so we got a big, round table in the middle. There was a big, comfy corner sofa lined with red velvet and the table was set with spotless white crockery and beautifully shiny cutlery that was so well polished it was if they were brand new. On our plates were neatly folded napkins and the cutest little scrolls tied with a red ribbon which had the menu printed on them. 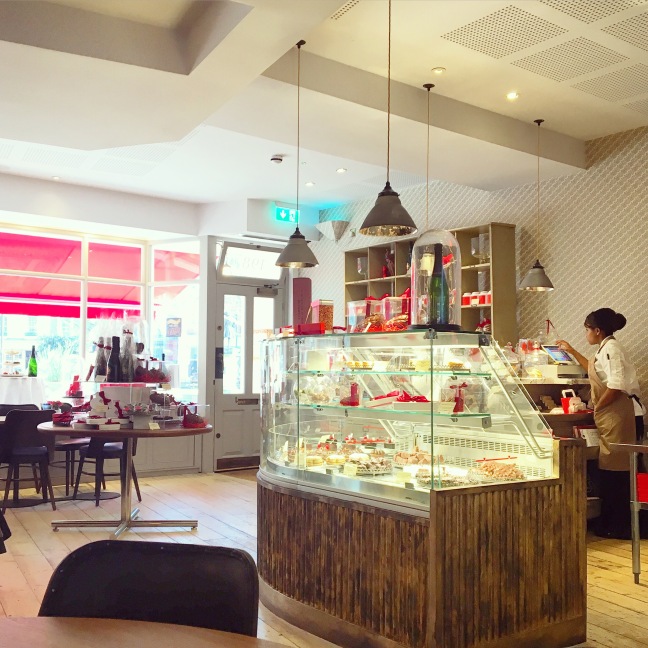 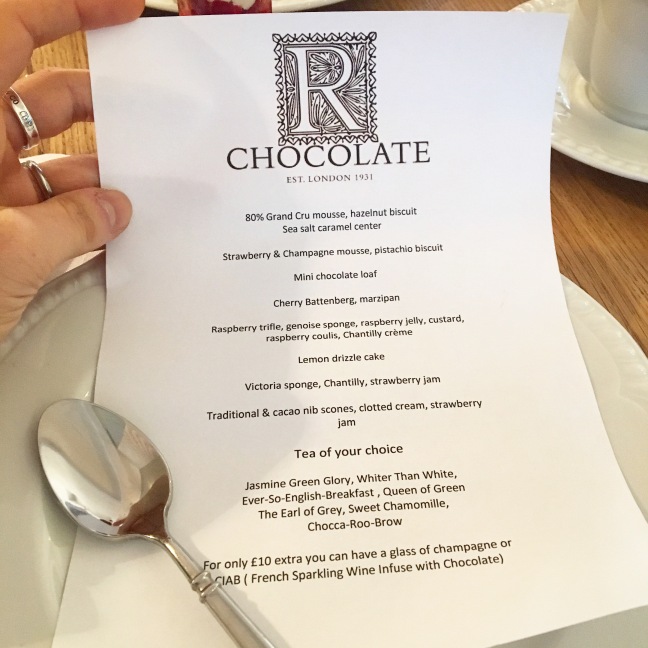 We were asked if we wanted to start straight away or have a few minutes to chat and relax first. Of course for us it was a silly question – bring us the cake!! – but it was nice that they gave us that option; the whole experience from start to finish was chilled and relaxing, which I find so rare in London when so many places are keen to get you in and out as soon as possible. We ordered tea and coffees and we were brought an amazing array of cakes and scones. Although they were served on a traditional afternoon tea stand, they were anything but. They’d put a unique chocolate twist on most elements without going overboard – much as I love chocolate I wouldn’t have wanted everything on there to have been made of chocolate; a traditional scone is my favourite part of afternoon tea! The waitress talked us through each item and what it was, but we were so busy eyeing up all of the delicious food that I don’t think either of us were paying attention.. thankfully we had the scrolls though because I did want to know what I was eating when it came to it!

We started with little tall, thin glasses of what looked like raspberries and cream. After having spoken about how neither of us are particularly big fans of cream or creamy desserts, we were in raptures about how good this little glass was. It was packed full of raspberries, raspberry coulis and the most deliciously light vanilla cream, with sponge pieces at the bottom. We both devoured that first, but later wished we’d saved some for later on! 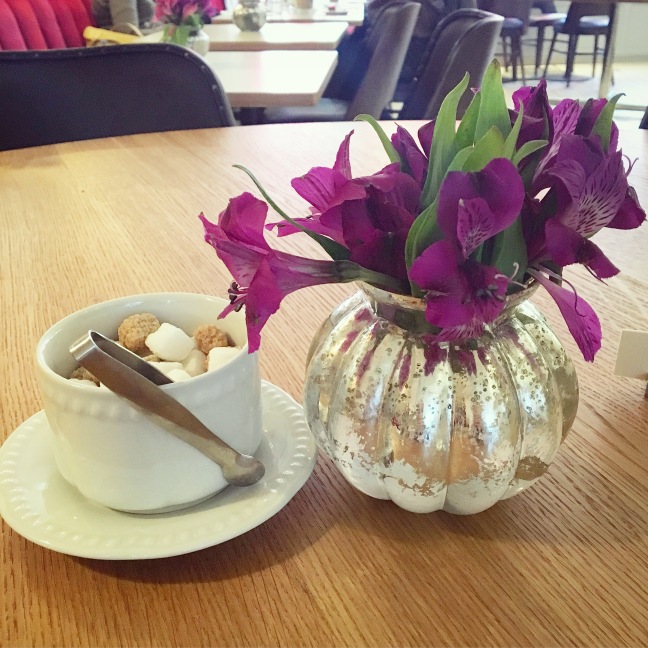 On the top tier were scones – although the simplest part, probably my favourite part of any afternoon tea. I can honestly say I’ve never had, or even seen, a cacao nib scone before, but it was amazing! Both of us were a little sceptical, as cacao nibs can be a little bitter, and not something I’d ever think to put in a scone, but they were such a lovely addition.. and better than chocolate chips in my opinion. The scones were served with clotted cream and a blueberry and chocolate jam. Yep, another bizarre flavour combination that really shouldn’t work, but it really does. First of all I don’t really like blueberry jam (or I didn’t think I did). Give me almost any flavour of jam – strawberry, raspberry, blackberry, plum – even apricot, peach or passion fruit, but blueberry is never a flavour I think I’d really like (probably because of a very bad experience with a St John’s bakery blueberry jam donut – it was horrendous!). But even worse – blueberry and chocolate!? Putting chocolate in jam would sound like a terrible idea, but somehow they make it work, and it was so good! They infused the jam with 70% dark chocolate and it was just the most subtle aftertaste that gave it a deep, rich flavour and took some of the sweetness of the fruit away – it was honestly amazing! Combined with soft, warm scones and it was a match made in heaven. I desperately wanted to ask for more scones to smother in jam! Typical me.. there is just never enough cake in my life!

On the middle tier were the Victoria sponge, lemon drizzle cake and a mousse with a hazelnut biscuit base and salted caramel centre. We started with the Victoria sponge which was definitely the right decision. Although still nice, it was definitely our least favourite of the lot by a long way. It was pretty, but a little on the dry side and the cream (unlike the incredible vanilla cream in the raspberry trifle glass!) was a little bland and tasteless – precisely the reason why I’m not a big fan of cream. 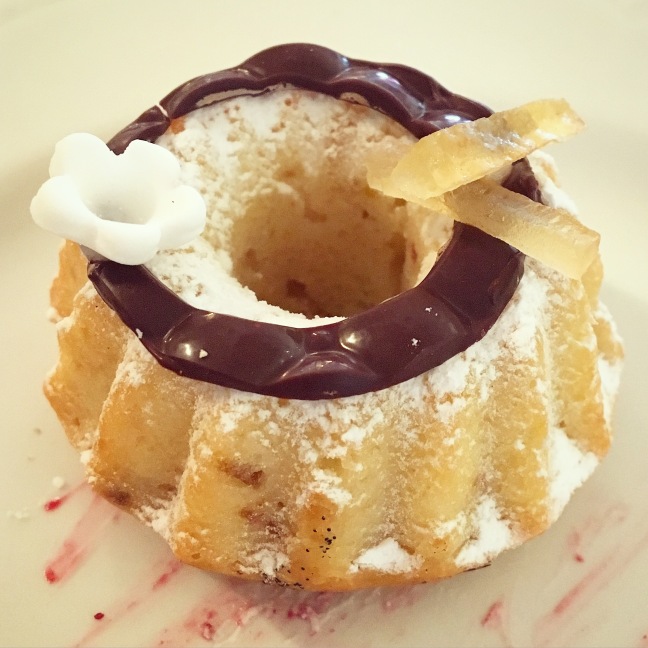 Everything else on that tier (and in the rest of the afternoon tea!) was amazing though. The lemon drizzle cake was quite firm but it was so moist and syrupy inside. It was baked into a beautiful mini Bundt cake shape and topped with beautifully sour candied lemon peel, a dark chocolate ring and a pretty little sugar flower. The chocolate mousse with a salted caramel centre was every bit as indulgent as it sounds. The flavour was rich and indulgent, but the airy texture kept it light, and the hazelnut biscuit base was divine. It somehow remained crunchy despite the moussey topping and it was so full of flavour – the type of moreish biscuit I’d want to buy an entire packet of to dunk into tea. 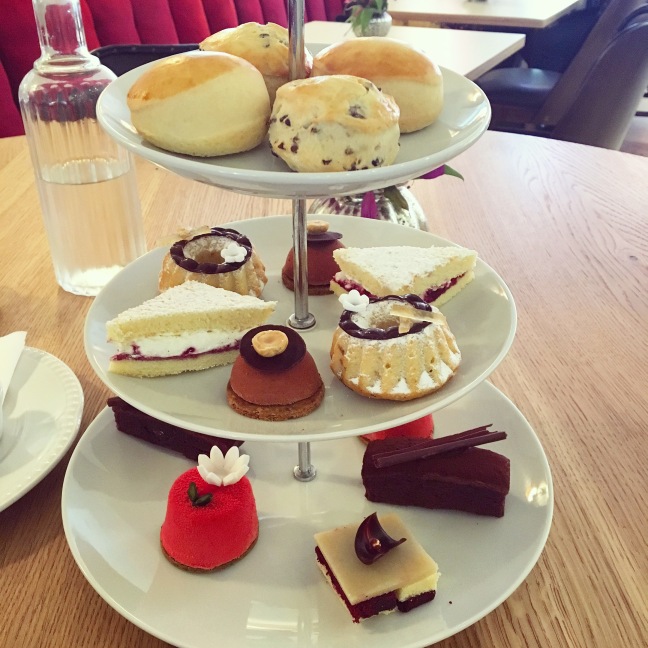 Onto the bottom tier, and what we both thought was going to be the least appealing cake of the lot. We actually ate it early on to ‘get it out of the way’ (first world problems or what!?) but it shocked us both. I can honestly say I would never choose a strawberry and champagne mousse in a month of Sundays. I love strawberries but I don’t like strawberry as a flavour, I don’t like champagne (and would never pick any sort of alcohol as a flavouring in food) and I would never choose mousse as a dessert as I find it light, airy and almost nothing-y (terrific English there). This was incredible though! The strawberry flavour didn’t taste artificial in the slightest, there was a thin layer of pistachio cake in the middle and the pistachio biscuit base was just as heavenly as the hazelnut biscuit base on the middle tier. The other two cakes were equally delicious. The cherry battenburg was made of plain and red velvet sponges, sandwiched together with white chocolate ganache and topped with a thin layer of marzipan. The mini chocolate loaf was dense like a brownie and topped with a generous dusting of 100% cocoa powder. 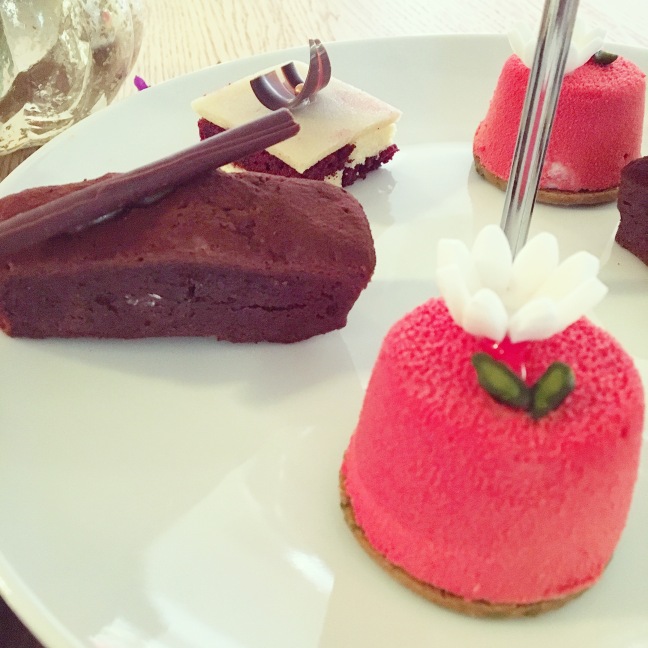 For me though, despite all of the wonderful cakes the best part was the scones. It might seem silly with so many other unique and beautiful items on there but I love the simplicity of scones slathered with cream and jam. Specifically these cacao nib scones with blueberry and chocolate jam!

As with all afternoon teas, I think it’s as much about the experience as it is about the food. I guess that’s the case with all meals out, as you pay for the luxury of being waited on, but I definitely think that’s especially the case with afternoon tea. The experience was always going to be good in such perfect company, but the atmosphere really was worth paying for. The service was really good and although the food was amazing, we managed to make it last a surprisingly long time as we spent hours chatting and deciding which of the amazing cakes to try next. As well as afternoon tea, they also have a range of chocolates and cakes to eat in or take away including boxes of chocolates, chocolate bars, Florentines, shortbreads and elegant patisseries that look (almost!) too pretty to eat. Being in such a beautiful location too, it’s the perfect way to spend an afternoon after wandering around the shops, galleries and markets nearby. 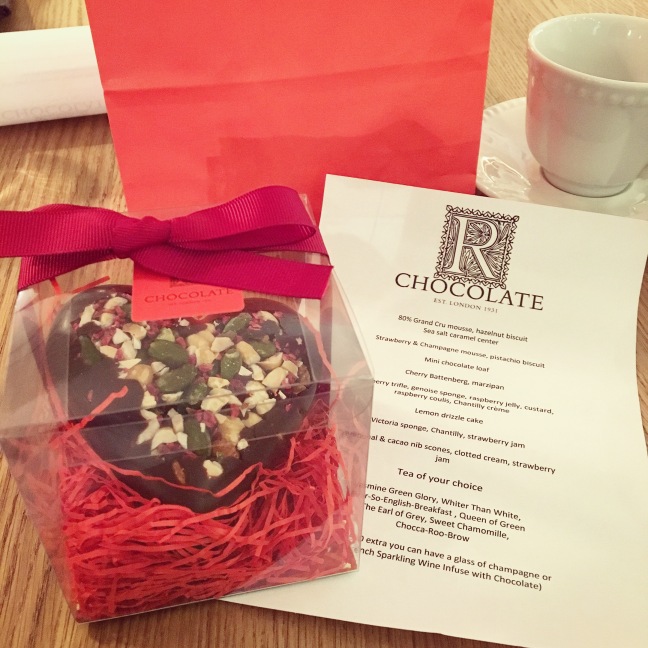 At the end of the evening the waitress wished me happy birthday and I was even presented with an amazing nut studded chocolate heart showcased in a beautiful box! It was such a lovely touch, and she even said I could swap it for a different flavour or type if any of the others took my fancy. My friend had also stopped off at a food market nearby on the way to brunch and bought me some artisan chocolates in the most divine flavours – including nut butter salted caramel – possibly my two absolute favourites!! By the time I’d travelled home, put my pjs on and made a cup of tea I was more than ready to tuck into them.. after all there’s no such thing as too much chocolate right!? 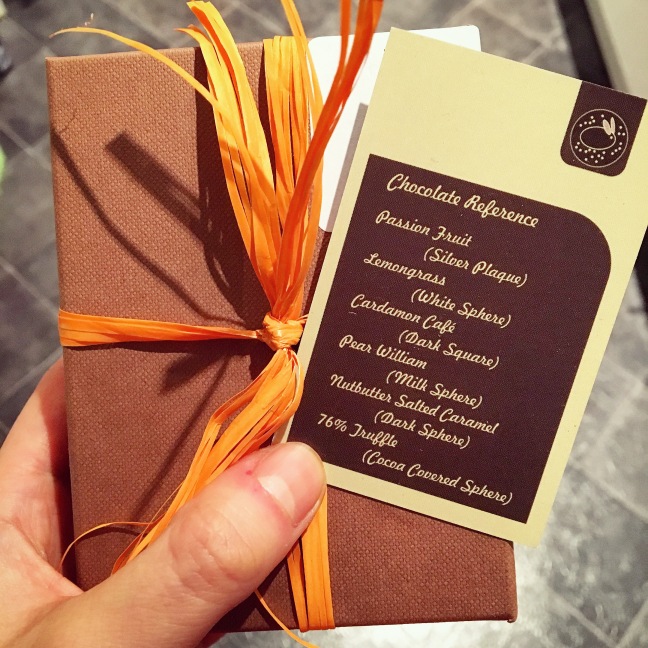