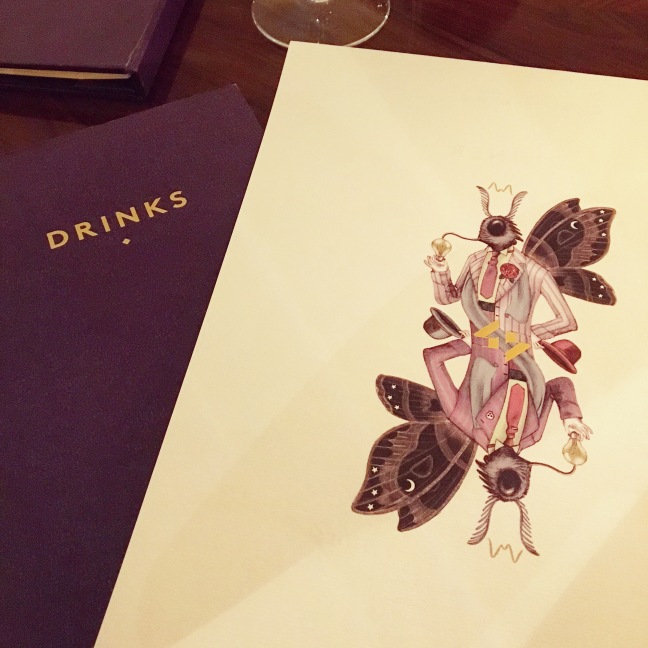 As a congratulatory gesture for winning a medal at the Olympics, Fortnum & Mason were generous enough to offer Marcus a complimentary dining experience – afternoon tea for four, or dinner for four.* We often go for afternoon tea, and it’s no secret that I love it, but we hardly ever go for dinner at fine dining restaurants and we thought it would be a lovely way to catch up with my parents, who we rarely see. My parents don’t have a sweet tooth either so I thought dinner would suit them far more, and sure enough when we told them they were delighted 🙂

It’s hard not to get excited about a free meal, but for a greedy person like me it’s a dream come true! Besides my mum laughing at me, there was absolutely nothing stopping me from ordering anything I wanted – no more having to make decisions; I just ordered it all! 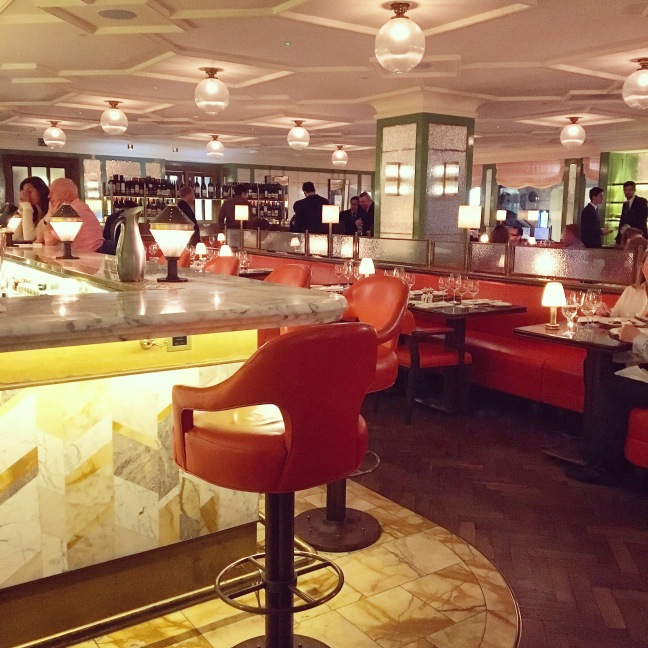 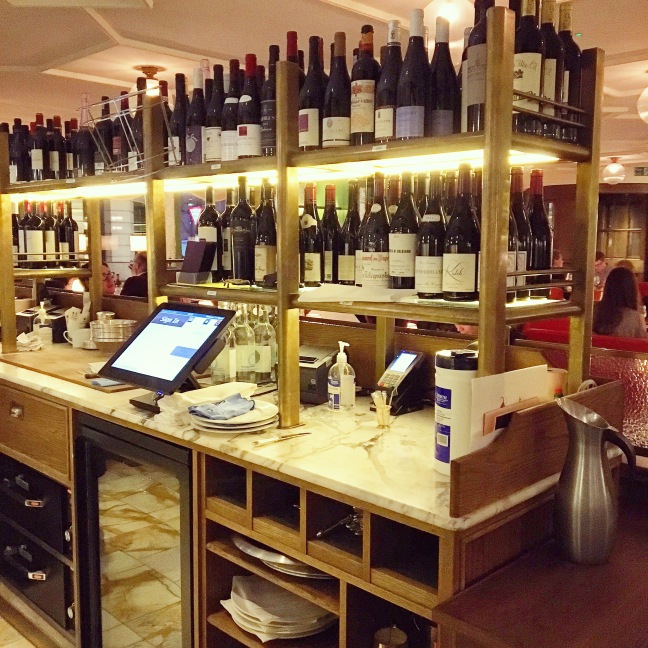 We were seated at a table by the window. The restaurant area is quite big, with one side taken up almost entirely by the bar, one side with doors leading off to the kitchen and the other two sides with booths by the windows. There are a few more tables in the centre of the restaurant, with leather sofas running down one side of the table and chairs for the other side. Our booth was quite private and comfy and I loved that we felt tucked away in the corner. The atmosphere was perfect – there was a buzz from general chatter and music playing quietly in the background whilst still being more than quiet enough to have a conversation without having to raise our voices and the low level lighting gave it a lovely relaxed feel. 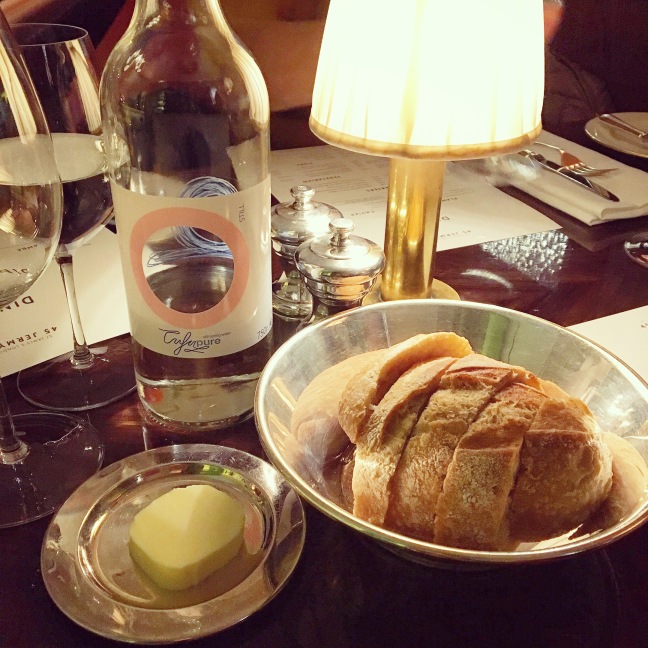 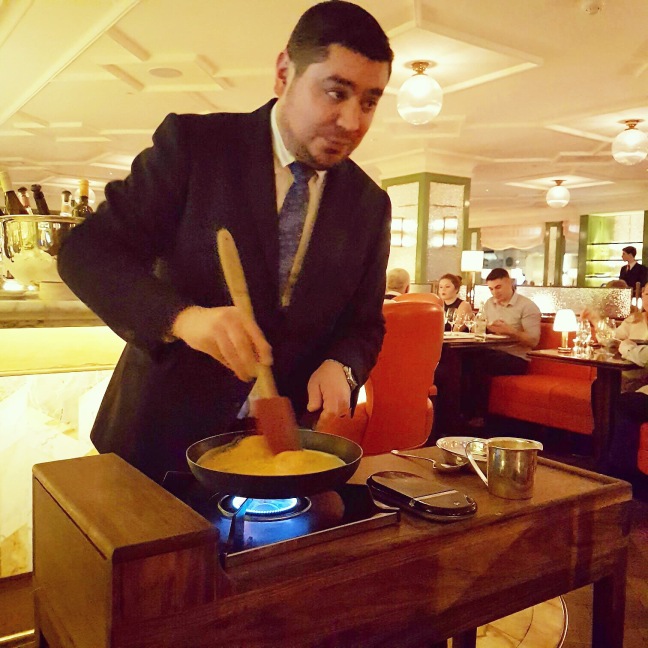 Before we even ordered, we were brought a fresh basket of warm sourdough with soft butter. Marcus and I polished off the whole of the first basket while my parents were leaving their coats in the cloakroom and going to the toilet and before we could even look up, the waitress was at our table asking if we wanted a refill. We didn’t need to think twice about the answer (obviously), but it was honestly some of the best sourdough I’ve had for a long time. I feel like most places offer sourdough bread now, but this bread actually had a sourdough taste and it was incredibly soft in the middle with perfectly chewy crusts. Spread with soft, slightly salted butter it was a carb lover’s dream. Before you get starters you have the option of ordering caviar or a few other items from the ‘trolley’ where someone cooks in front of you. My parents love caviar (I’d never had it) so we got some, and it came with scrambled eggs, sourdough toast, blinis, mini baked potatoes and sour cream. I tried the caviar just because it was there, and it was okay – it certainly wasn’t unpleasant – but at up to 6.70 a GRAM, I just can’t see the appeal. You could literally be leaving a fiver’s worth of food on your plate if you didn’t lick it clean! The scrambled eggs were soft and buttery though and the blinis and buttered sourdough toast went down a treat 😉 Marcus and I left the caviar to the more mature palates of my parents. 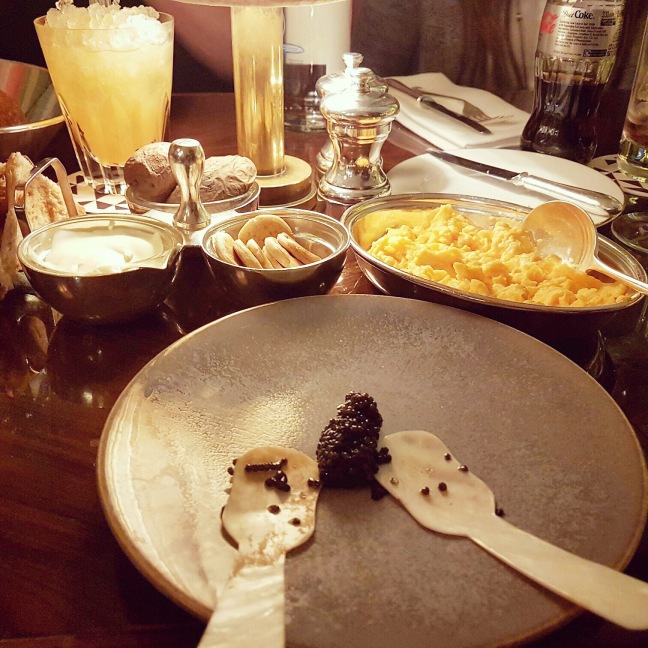 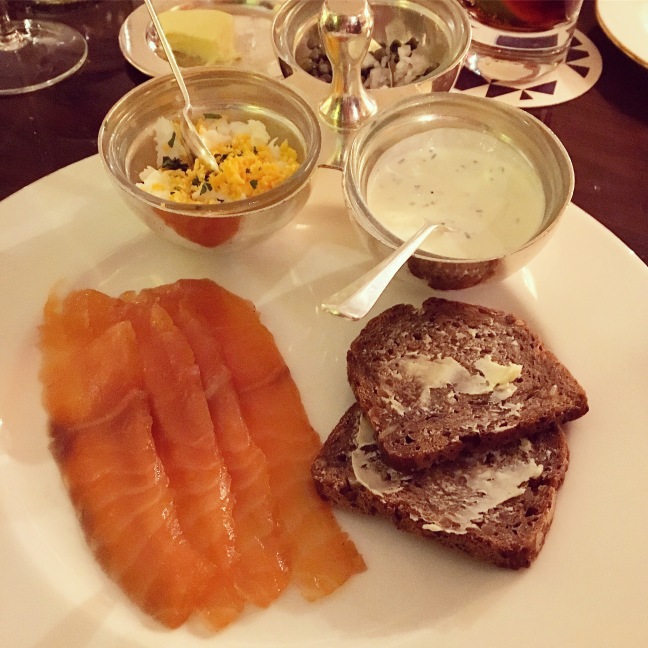 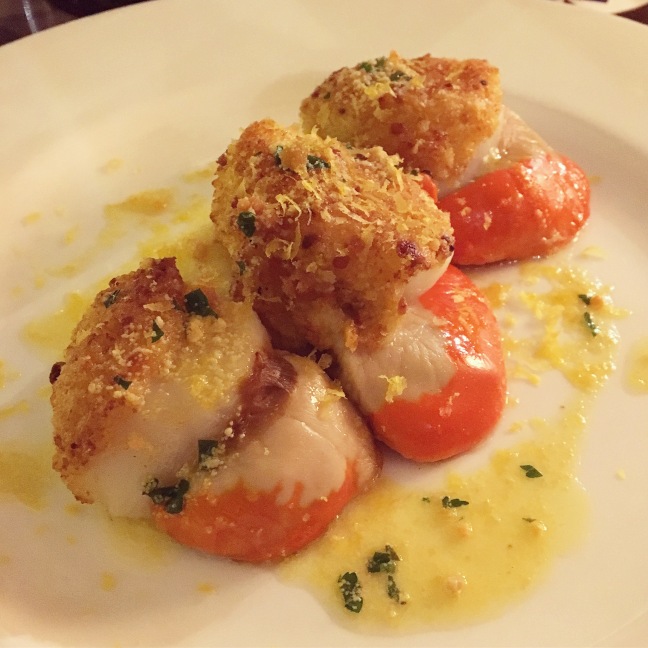 For starters I couldn’t decide between smoked salmon and soda bread (which I love but I guess it’s a little boring) and scallops with a pine nut crust and butter sauce. So obviously, I went for both. My mum also had the scallops, Marcus went for a woodland mushroom risotto and my dad had Burford brown crab. The salmon was lovely, but a little overpriced (vs the other starters) at four (very) thin slices and two tiny bits of bread. The scallops were beautiful though – they were absolutely huge, cooked in a buttery sauce coated in a crisp crumb, served on a deliciously smooth, cheesy mash– the perfect combination. I tried some of my dad’s crab, which was lovely too. Marcus’ risotto was ridiculously tasty. It certainly wasn’t a looker (though I challenge anyone to make a mushroom risotto look pretty!) but it was well seasoned, creamy and packed full of mushrooms. You could order it for a main course and if it didn’t feel like such a cop out going for a veggie main then I probably would have!

For my main meal I was torn.. all of the veggie mains sounded amazing but so did the meats and the fish. I was already slightly embarrassed about ordering two starters (my mum even took it upon herself to point it out to the waitress that I was having two!!) so I decided to not take the p*ss and choose one with a few sides! After much deliberation I went for the lobster spätzle. I love lobster and I rarely ever have it because it’s so pricey, so I was so excited. Every single fish dish sounded amazing though, and I have to admit that when it arrived I was slightly disappointed – I got about three pieces of lobster 😦 I’ve only had spätzle a couple of times before, and this one was a lot more dense and starchy than I remember it to be. It was almost like a cross between gnocchi and pasta – it was as though I could feel it sitting heavily in my stomach from the moment I swallowed! It was in a beautifully rich and creamy sauce though, and besides the quantity of lobster I got, I couldn’t really complain. I also got an aubergine and tomato salad and some fries as sides. The fries were incredibly crispy and very, very moreish.

Marcus and my dad both went for the sirloin steak, and at 38 pounds you’d think it was pricey.. until it arrived. It was HUGE. An absolute monster of a slab and it was cooked to perfection too – pink, tender and juicy. My dad gave me a sizeable chunk and he was still left with a normal sized steak! 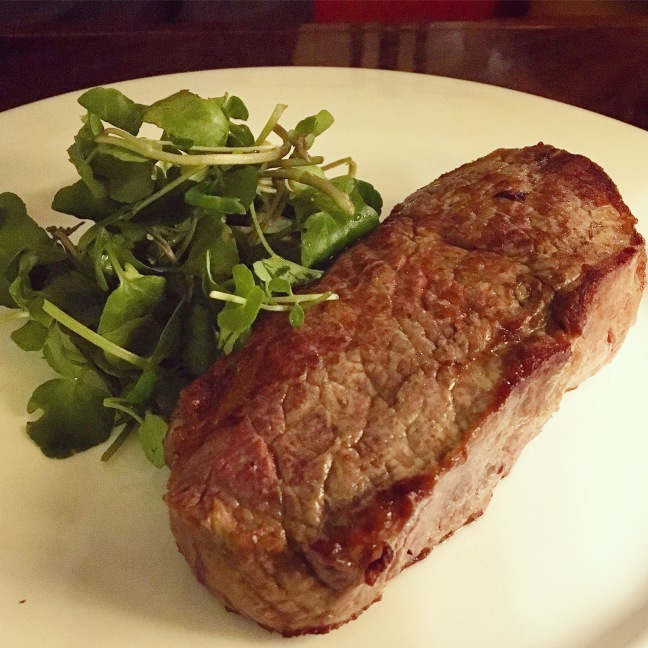 My mum got the veal. It was small but beautifully presented, and perfect for her as she (half!) joked that she was full after the caviar and before she’d even finished her starter she was already stressing that there were still two courses to come!

Then there were the desserts!! They were my favourite part of the meal. Of course they were- when are they not!?

Awesome as it was though, it wasn’t even my favourite of the desserts I had. I also got the apple and rhubarb pie with pistachio ice cream and it was absolutely divine. Crisp, buttery pastry with a warm, sweet filling and a sugary top – literally heaven on a plate. My dad was torn between a knickerbocker glory or my mum’s suggestion of an alcoholic float. In the end he went for a knickerbocker glory, and he ate it with almost child like excitement. As soon as it arrived, his face lit up, and so did mine (I knew he’d let me share 😛 ). There was layer upon layer of fresh fruit and ice cream, and it was topped with a beautiful caramelised marshmallow dome that he happily dug through to get to the ice cream. My mum was really struggling by this point, so she got champagne soaked strawberries with ice cream, and donated her ice cream to me. If I could possibly find a fault with my apple and rhubarb pie it would’ve been the lack of ice cream, so her ice cream donation was a welcome addition to an otherwise perfect dessert 🙂

To top it all off our waitress was absolutely lovely. From the moment we walked in we were made to feel special. Maybe it was partly because of Marcus (they recognised him and seated us as soon as we walked in without asking for the name under which our booking was made which was strange!), but all of their staff were impeccably trained. 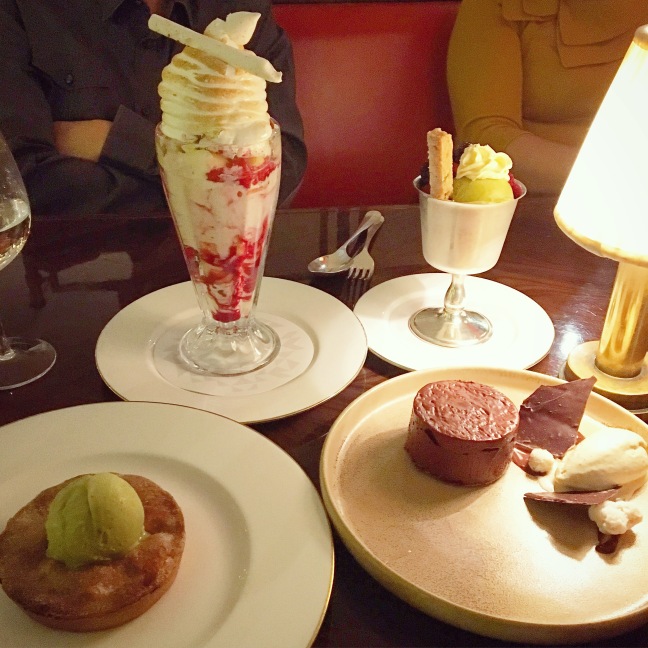 It wasn’t all perfect – they certainly could’ve been a little more generous with my lobster, and my simple salad could have done without the half litre of oil it was drowned in. But then when you finish on desserts as good as theirs and get given a mini bag of truffles each to take away, it’s hard to leave feeling anything but positive. 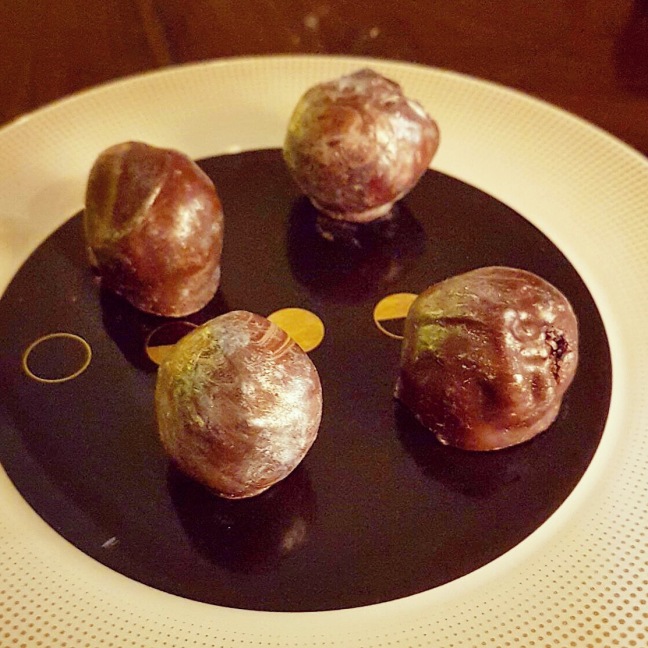 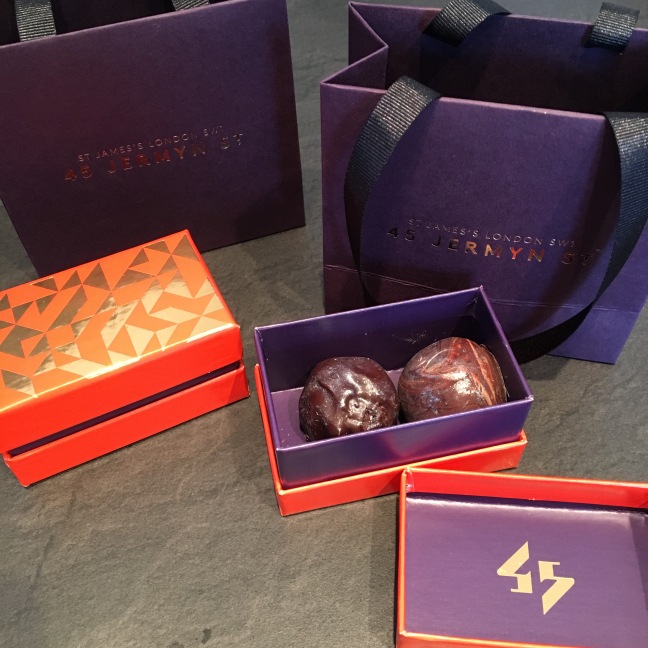 Overall, I wouldn’t say it was the best food experience I’ve had quality wise, and I could pick more faults if I was being fussy, but they have a bloody good menu with some absolute gems on there.. and most importantly the dining experience as a whole really was special. Of course as with all fine dining experiences it comes at a price, but I’d definitely recommend it for a special occasion, and for anyone visiting London as a tourist, you can’t get much more British than Fortnum & Mason!