La Cocotte is a chicken rotisserie restaurant based in the beautiful area that is Notting Hill. With a focus around grilled chicken and sides, you’d be forgiven for expecting a bit of a glorified Nandos, but as soon as you step inside the restaurant you’ll forget that thought even crossed your mind – the focus on chicken is quite literally where the similarity ends. Good quality, warming comfort food, a beautiful interior and a bar serving up incredible cocktails – it couldn’t be further away from the global fast-food chain. 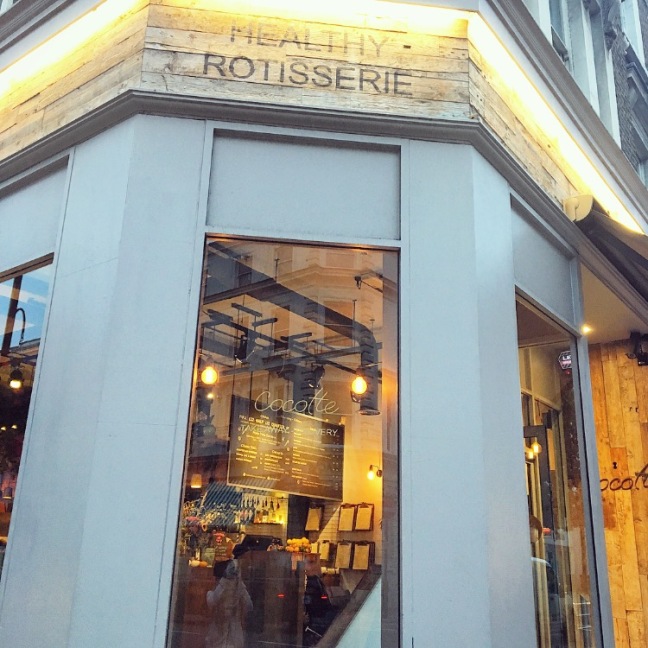 How cute is the interior!?

Run by a group of friends originally from Paris, they’ve gone for a simple concept – with a focus on quality ingredients inspired by the popular establishments of the French capital that offer healthy, delicious chicken dishes available for delivery or takeaway.

I love all meat and fish but I have to admit that whilst it’s often considered as one of the less exciting meats, chicken (when it’s cooked well!) is my favourite. I rarely cook chicken breasts as I find that they can get so dry, but when chicken is roasted well I absolutely love it. Of course the focus here is on their rotisserie chicken, so you’d expect roast chicken of the highest quality. 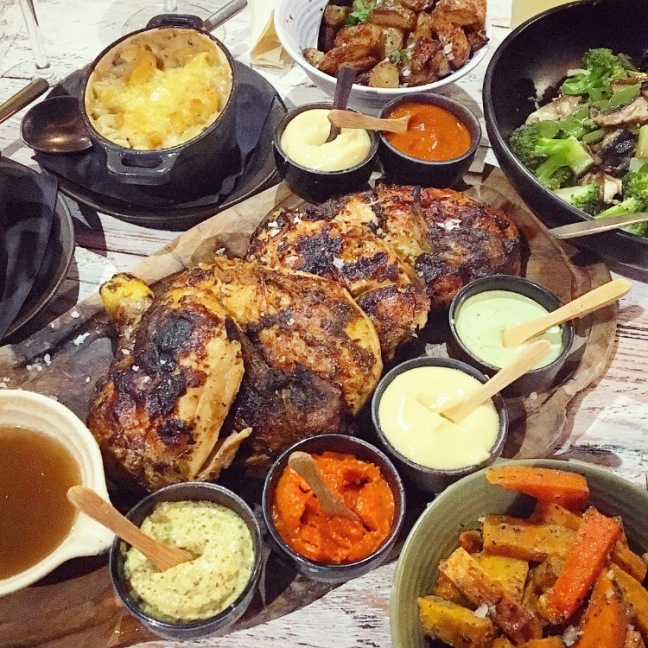 Their chickens are from a farm in La Chapelle d’Andaine in France and spend their lives outside, fed with a natural diet combination of vegetables and corn. They are marinated for 24 hours in La Cocotte’s secret recipe of herbs and spices before being roasted to perfection. The meat was tender, juicy and packed full of flavour – it couldn’t have been cooked more perfectly. Even the centre of the chicken breasts were still soft and succulent despite being huge chunks of meat. 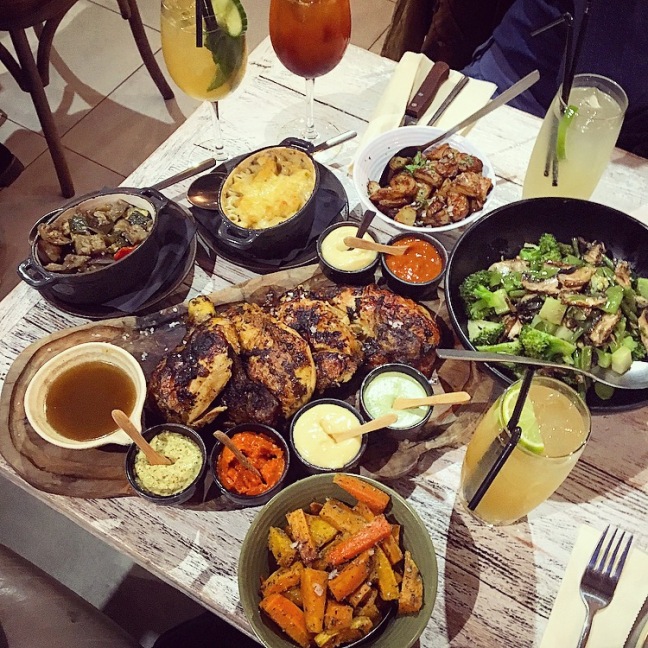 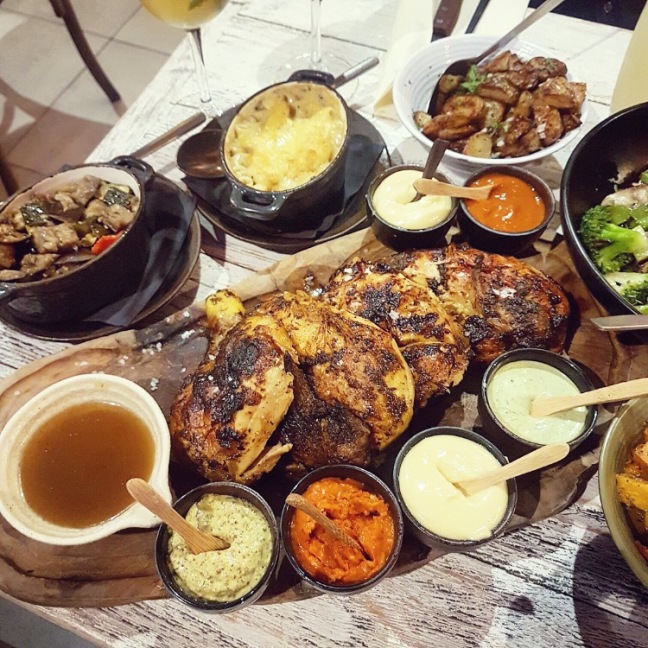 I’m not usually a big fan of chicken skin – it’s take it or leave it for me – but here it was crispy, golden brown and charred to perfection on the grill, and as if that didn’t add enough flavour they have no fewer than seven sauces so that you can add extra flavour no matter what your preferences are. Of course we got them all – and I’d definitely recommend trying them all as each one is so different, though some definitely ranked higher than others for me personally. 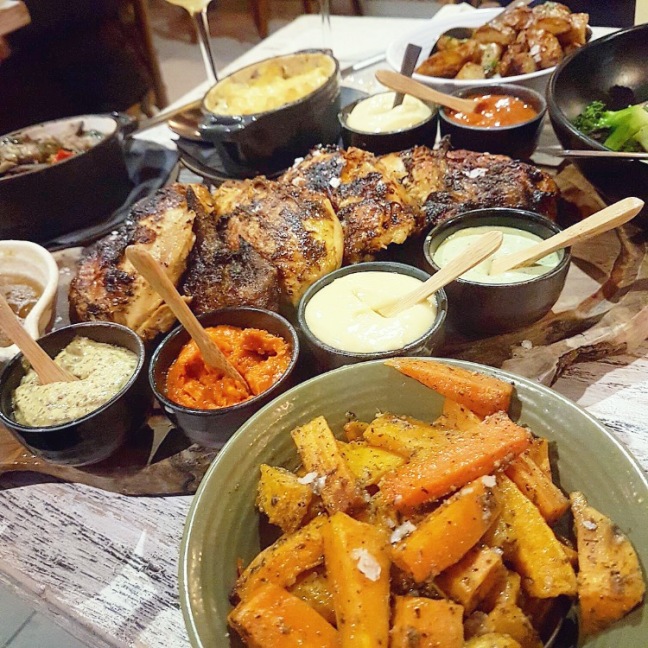 They have garlic mayo, BBQ, cocotte mustard, chicken gravy, spicy, green sauce and truffle mayo. My personal favourites were probably the BBQ, the green sauce and the spicy ones. The BBQ sauce definitely wasn’t your typical BBQ flavour – if it hadn’t been called BBQ I might not even have identified it but I loved the flavour of it. Similarly I couldn’t pinpoint the flavours and spices in the green sauce, but that too was one of my favourites. The only two which were disappointing was the two mayos. I don’t actually like mayonnaise but with garlic and truffle as the two promised flavours I was pretty excited about them, but the flavour of both was distinctly underwhelming. I could barely taste the difference between the two, and the taste of truffle is usually so powerful. 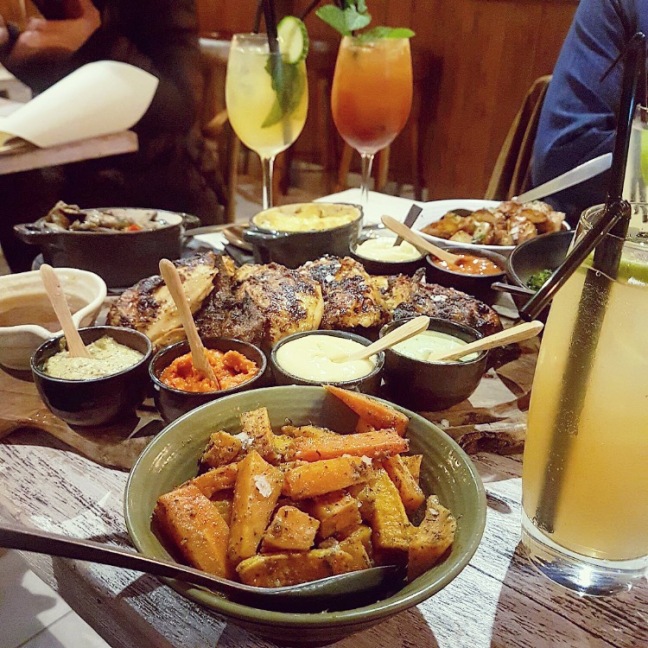 Then there are the sides. What meal is complete without all the sides!? They have a range to suit all tastes – from potatoes roasted in chicken dripping and truffle mac & cheese (instant winner!) to lighter options like salad and ratatouille. We ordered them all – of course we did. To see mac & cheese on a menu and not order it is bad enough, but to see it with truffle and not order it would be absolutely criminal – I love truffle and the flavour it adds to an already brilliant dish. It certainly didn’t disappoint – the sauce was thick and creamy with a strong truffle flavour finished with a bubbling layer of melted cheese melted under the grill. The potatoes were crispy and generously seasoned with rosemary and coarse sea salt, the vegetables in the ratatouille were cooked down beautifully in the rotisserie and the roasted carrots and butternut squash were lovely and soft. 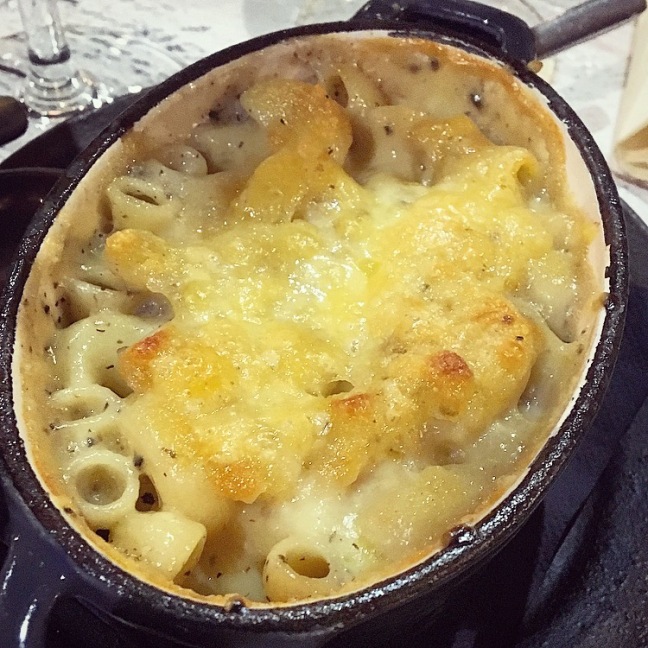 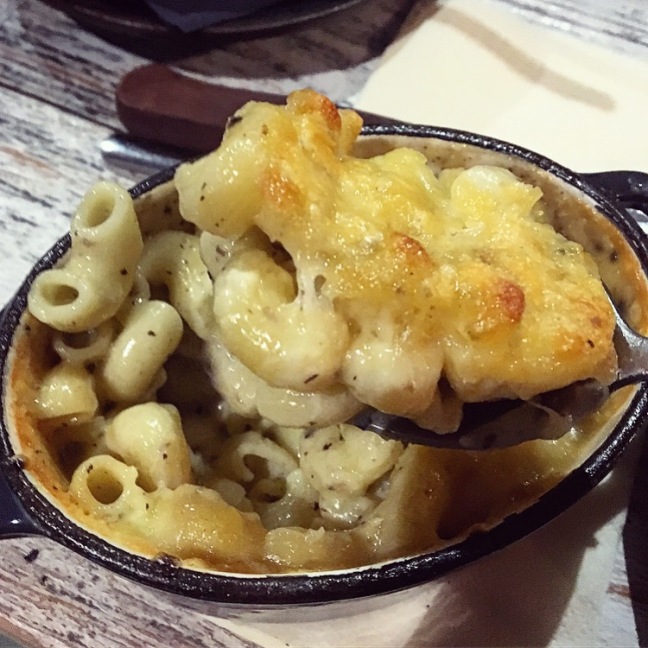 Much as I love salads, when I’m eating a hot meal I often avoid them, but the salads at this place were too good not to try at least one. Despite the recent rise of exciting salads, I find that a lot of restaurants still interpret salad to be a few leaves with some tomatoes, cucumber and maybe some red onion if you’re lucky. Not at Cocotte. They have a huge variety of salads available as sides or mains with a variety of grains (barley, quinoa and bulgur wheat) featuring alongside kale, broccoli, green beans, broad beans, roasted peppers and other vegetables, with the option to add extras like chicken, feta (obviously not optional – what’s a salad without cheese!) and avocado. I chose the ‘Nini’s salad’ (broccoli, broad beans, green beans, basil, olive oil, mushrooms and lemon dressing) with extra feta and it was delicious – Marcus even had some as there wasn’t a lettuce leaf in sight! 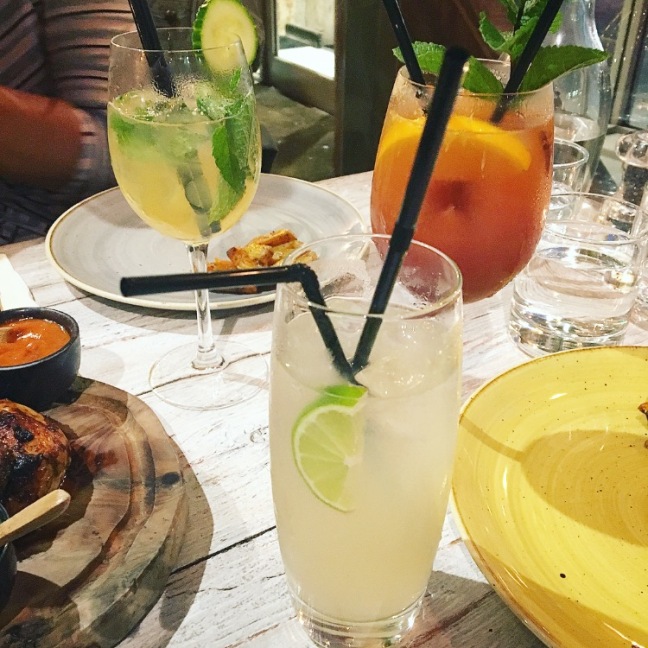 I was seriously excited about the desserts. I know that seems obvious for me – when am I not! – but considering the size of their dessert menu (and the surprising number of desserts that I’m actually not that keen on – tiramisu, crème brulee, panna cotta to name just a few!), the odds of finding a great dessert probably wouldn’t have been in my favour. I wanted to eat everything on their menu though – two cakes in what would pretty much be my ideal flavours and mochi, which I surprisingly love! I’m not a fan of pretty much any Asian dessert, so my love for mochi surprises me, but I just love the chewy outside and the exciting flavours – I can’t seem to stay away from the latest Selfridges pop up! 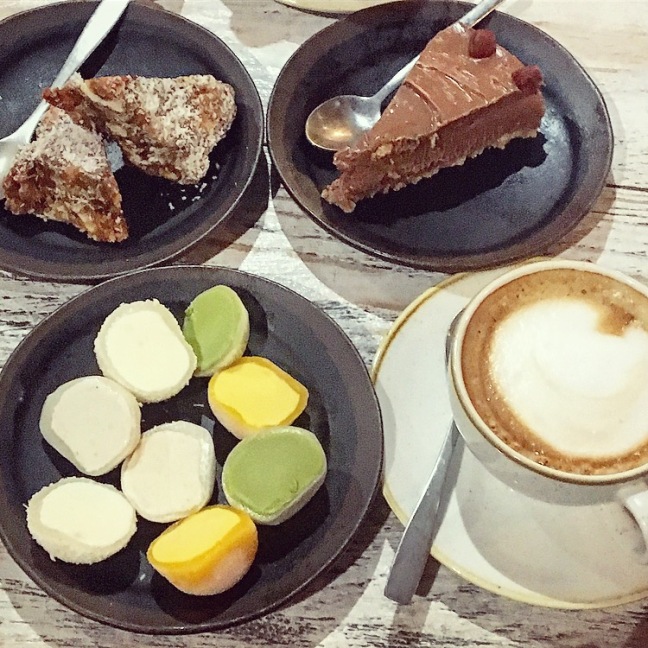 Marcus was slightly less excited than me – he refuses to try mochi (even if it’s chocolate flavoured!) and he also doesn’t like dates, which featured in one of their cakes. That didn’t stop us from getting all the desserts though – literally 😉

We got a chocolate and hazelnut cake, a date and coconut cake and I chose four flavours of mochi – coconut, green tea, vanilla and mango.

I loved all of the mochi flavours, though vanilla was my favourite! I know vanilla is often perceived as a boring flavour but for me when it’s done properly (with real vanilla pods!) then it’s definitely one of my favourites. Besides the fact that I felt like I had to rush through eating them slightly for fear of losing any of the precious ice cream filling I couldn’t fault them J The date and coconut cake was absolutely incredible too.. it was pretty much tiffin with the addition of dates – there were biscuit pieces scattered throughout. Like the mochi I couldn’t convince Marcus to try any but he was more than satisfied with his chocolate and hazelnut cake. Cake was an interesting description though – there wasn’t a crumb of cake in sight! He certainly wasn’t complaining though as it meant there was a significantly lower chance of me stealing half of it and he’d polished it off before I’d even got through my mochi!

If I’m honest, the lack of bread on their menu was slightly disappointing. I like to start all good meals with warm bread and butter, and everyone knows that no one does bread like the French, but they’ve stuck to a simple menu and whilst they’re not winning any awards for innovation they’ve executed it perfectly, so if that’s the only thing I can find to complain about I think they’ve done a seriously good job!