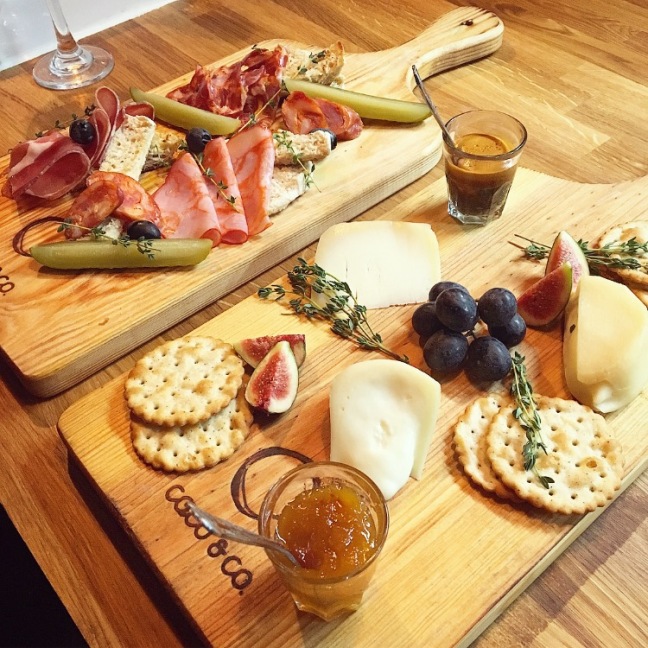 Carbs. My one true food love. Who doesn’t love freshly baked bread, steaming hot from the oven, pillow soft inside and slathered with butter? I’m sorry if you don’t then we just can’t be friends. Little did I know when I turned up to the Cacoco restaurant launch event that I would be surrounded by mountains of soft bread rolls – absolute food heaven.

Caco & Co is a Portuguese restaurant with a focus around Portuguese street food and wine. Set up by a team of incredibly friendly staff from Madeira their aim is to bring a true taste of Portugal to London. After successfully opening their first restaurant in Shepherd’s Bush, they’ve recently branched out to a new location at Blackfriars, just minutes away from Southwark station and a short walk from Waterloo. 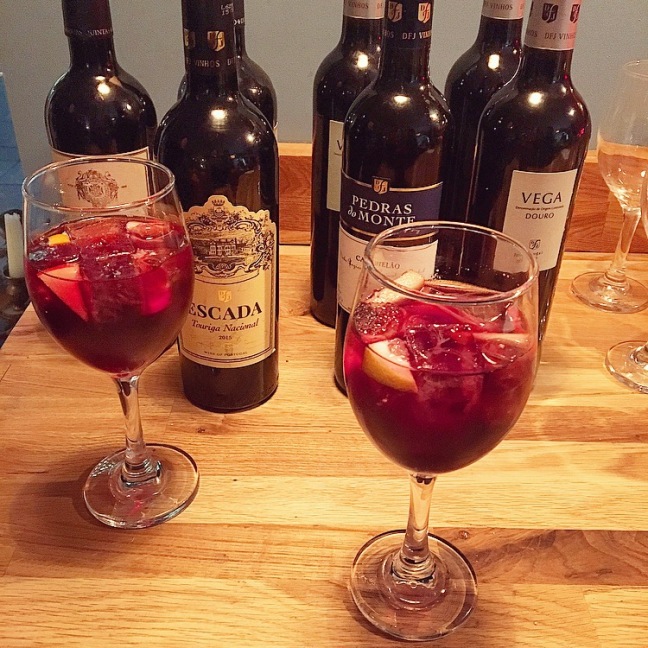 I wasn’t actually sure what type to expect when I turned up. Besides custard tarts, I don’t really know what Portugal are famous for food-wise but I expected meat, fish, wine and some potato based dishes. Of course they have plenty of meat and fish dishes which showcase their high quality ingredients perfectly (their tuna is sashimi-grade!!). But their main focus is around mixing and sharing plates (my type of meal!) and much of their menu is based around the iconic Portugese street food ‘pregos’. Their pregos are served on Bolo Do Caco, their homemade stone baked bread born in the streets of Madeira more than a century ago. Light and fluffy, it almost reminded me of a giant English muffin, griddled to perfection on a hot stone slab which we were told was imported specially from Portugal to create these carby mounds of heaven! 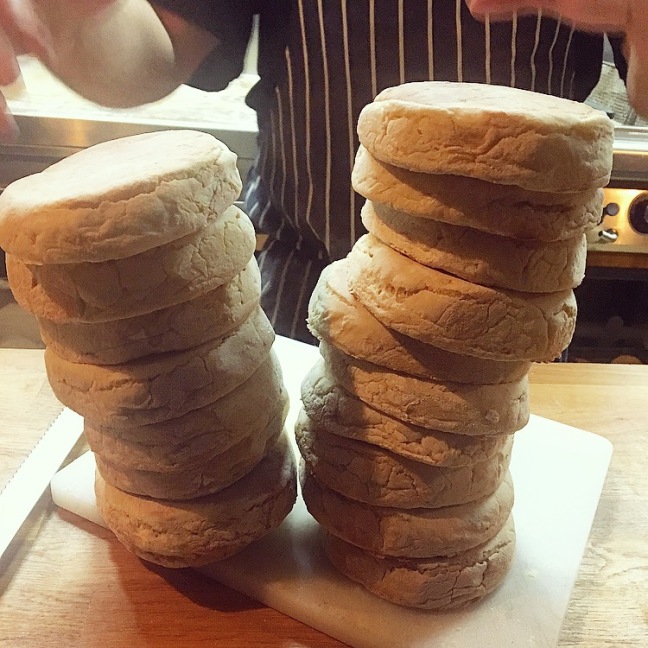 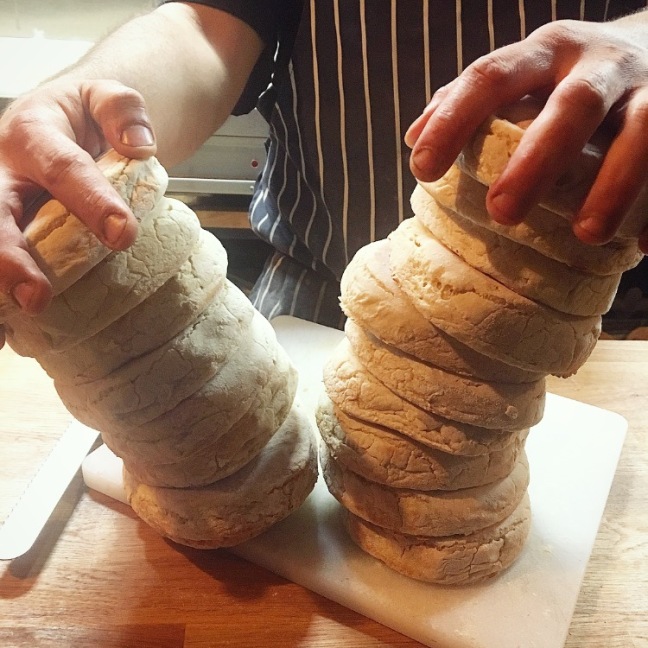 Whilst the chef started to prepare the Bolo Do Cacos we were presented with stunning meat and cheese boards – so beautiful that I thought they were just for decoration. They reminded me of one of those beautiful creations that often sit in cute deli shop windows to entice you in! To my delight we were told to dive in though, and despite a fleeting thought that they were almost too pretty to eat, a millisecond after they told us they were for eating we got right in there.  On their menu is a meat board, a cheese board or a mix for just one pound more. Each one is served with a hot toasted Bolo Do Caco, and that was when we got our first sample of the mind-blowingly good bread. 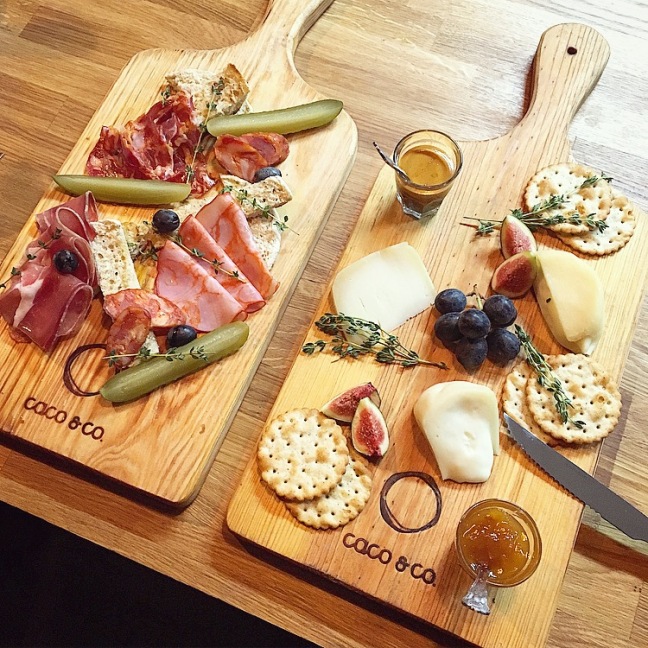 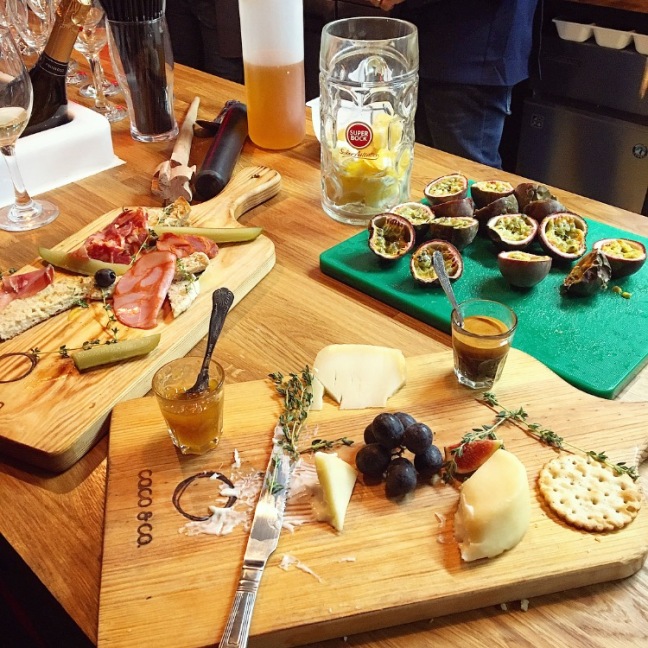 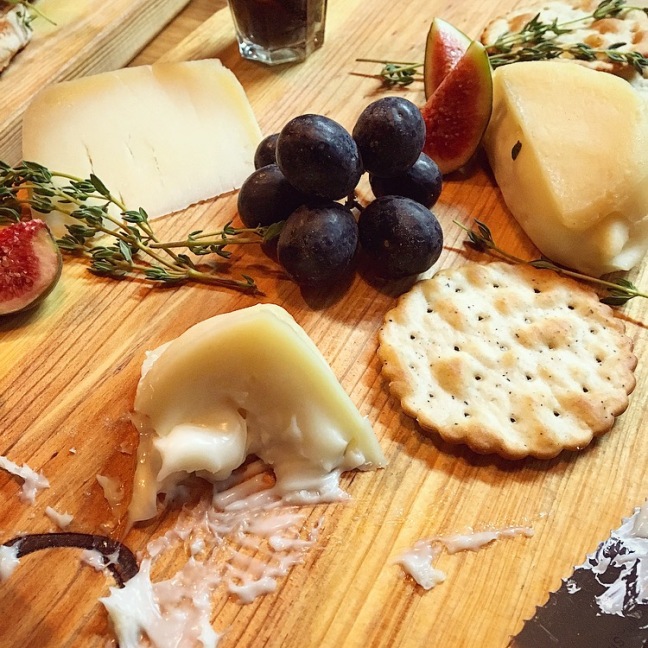 The Bolo Do Cacos started off simply slathered in garlic butter and sweet potato hummus. To be honest I would’ve been happy with that –they were that good. But then came the fillings, and God they were good. They have every filling imaginable – meats, fish, veggies, cheese and even a vegan one. 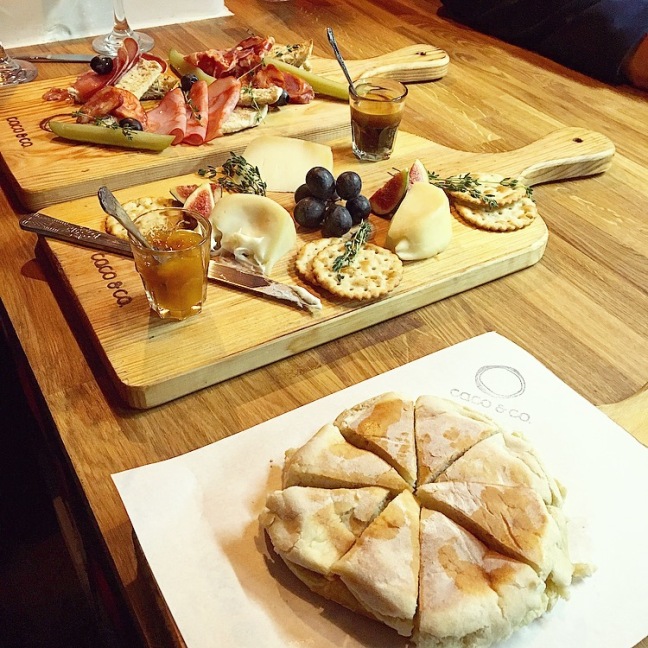 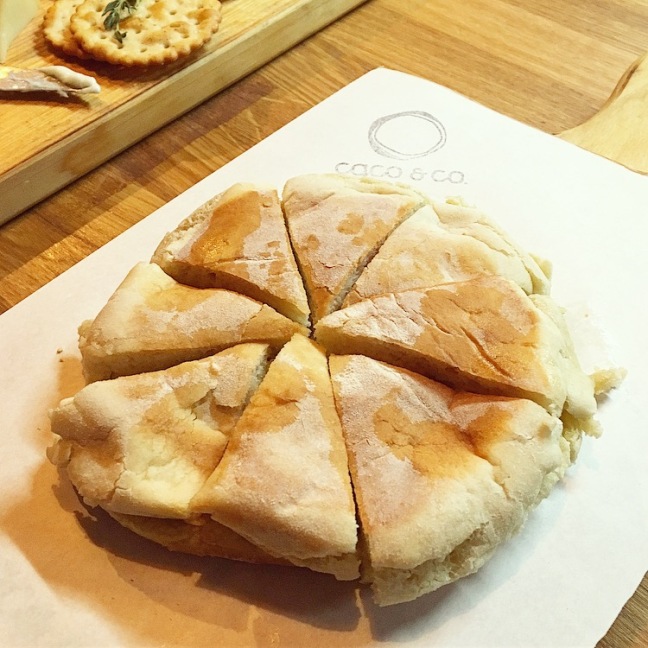 We began with tuna – a yellow fin sashimi grade tuna fillet packed into a roll with watercress and passionfruit mayo. It was divine. I absolutely love seared tuna and this one was cooked to perfection – I couldn’t stop going back for more. If the seared tuna in the prego was anything to go by, I imagine the actual tuna dish on their menu (sashimi grade tuna loin with sea salt and lemon thyme) is to die for. 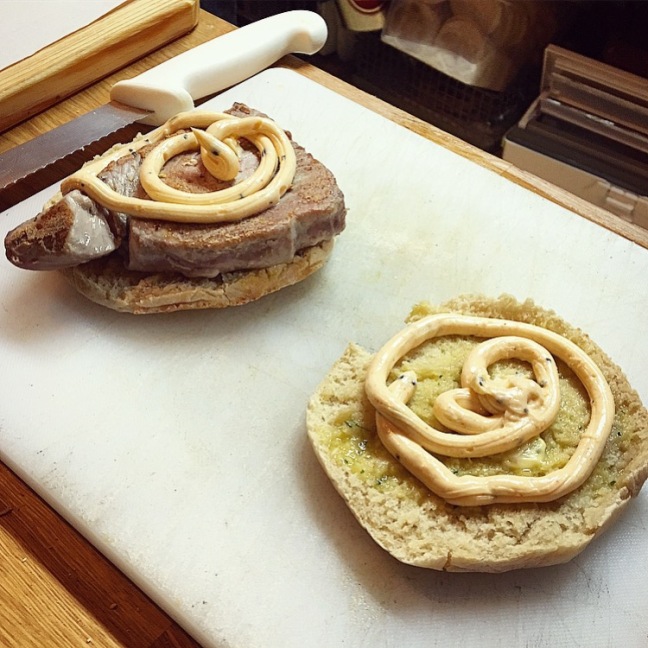 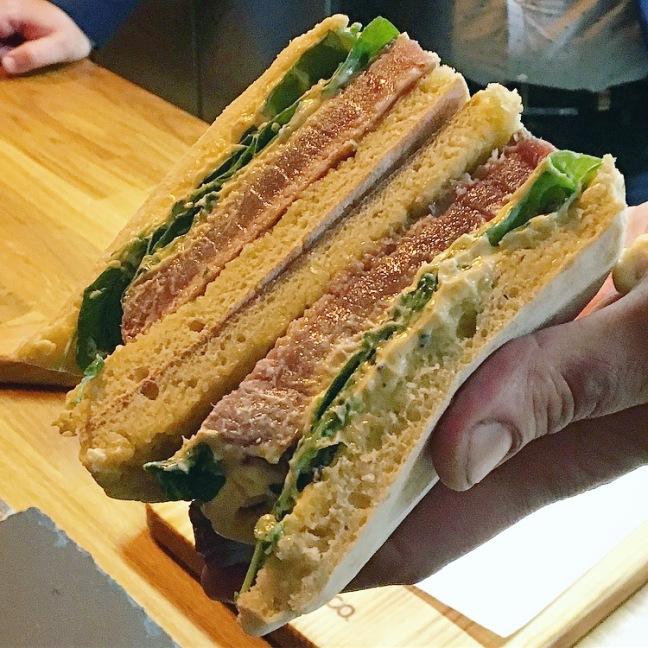 Then we moved onto meats, including their classic (grass fed sirloin steak) with cheese and sweet onions (they also have it with presunto and egg), poultry (chicken thigh with bacon, lettuce and mayo) and chorizo burger (steak, chorizo, Medjool dates, yogurt sauce, lettuce and tomato). Each one seemed better than the last and every single one had the most incredible balance of fillings. 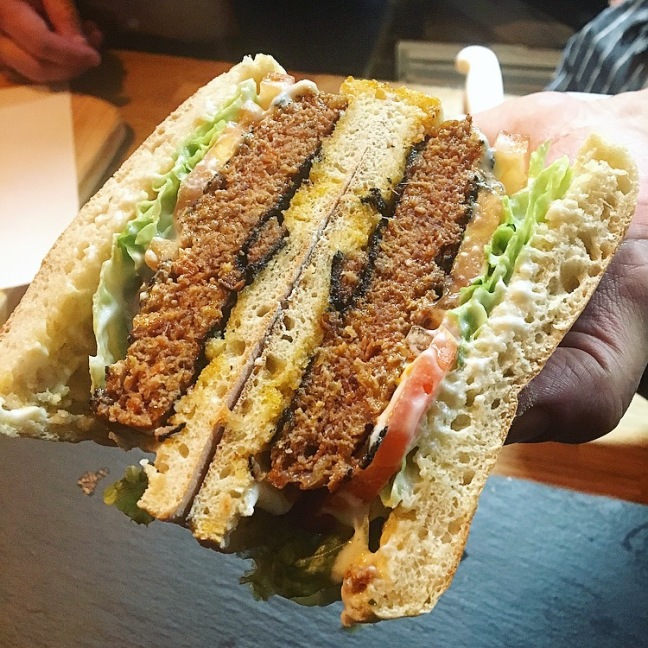 Even the vegan one was stunning. Obviously unlike the others there was no garlic butter but I didn’t even notice. Instead of the garlic butter the rolls were smothered with sweet potato hummus before being stacked up with incredibly tasty Portobello mushrooms and spinach.. I don’t know how they achieved such incredible flavours without using butter! 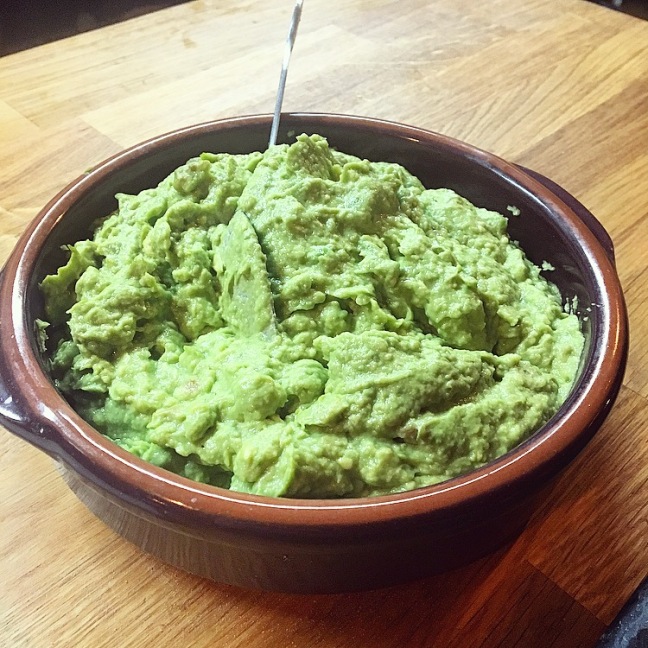 Next up was the halloumi prego and and as soon as the chef whacked a giant bowl of guacamole on the table I could already tell it was going to be one of my favourites. There’s no messing around here – both sides of the sandwich get covered with spread. This one was every bit as amazing as I hoped – after slathering the warm preggo with guacamole he then piled it high with halloumi and roasted veg and it was perfect. 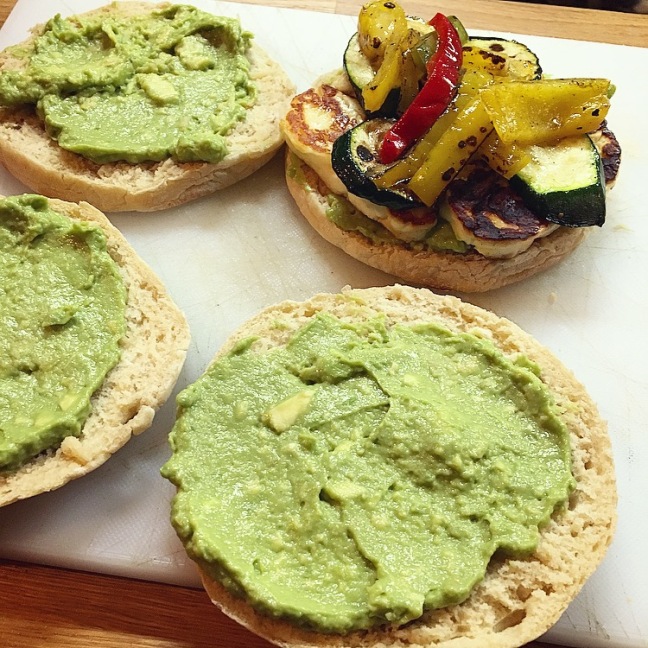 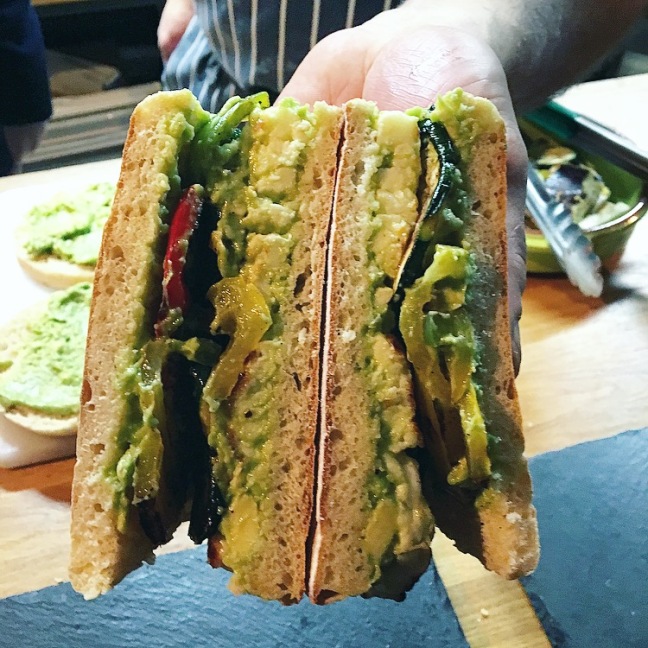 Already happily stuffed with pregos of all flavours and combinations, the restaurant manager started to bring out huge metal stands. More food? Absolutely. The chef went back to prepping more of the simple Bolo Do Cacos – again generously spread with garlic butter – and while I was distracted pinching the extras the most incredible chunks of meat were brought out, sizzling on skewers to be hung from the metal stands. Skewer after skewer of succulent meat came out, with a foil parcel of garlic butter tied at the top, allowing it to stream down onto the meat to make it even more juicy and tender. The buttered pregos were to mop up the juices – we were actually told to eat the meat by grabbing it using a slab of prego. I didn’t need to be told twice! Much as I love a good cut of meat cooked well, carbs are where my heart lies, and I personally couldn’t think of many better ways to eat a juicy chunk of meat than wrapped in a soft buttery Bolo Do Caco. 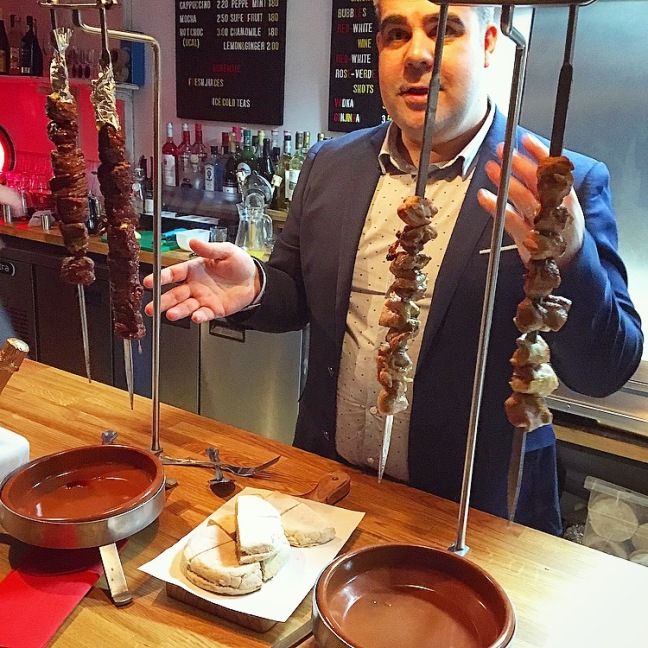 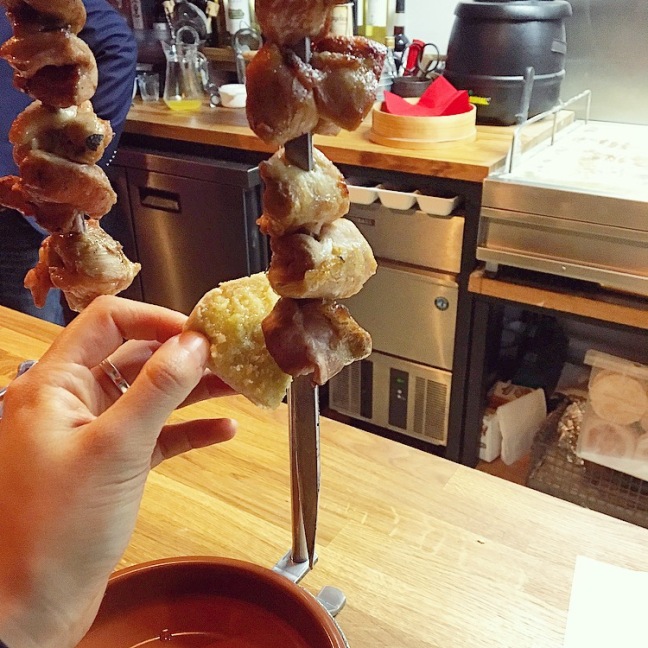 Then came more pregos – to my delight the chef started knocking up more of the halloumi ones – I was convinced it was my favourite. But then it was back to one of the originals – the seared tuna and I was reminded of how incredible it was. I decided that whichever one I was currently eating was my firm favourite. Despite feeling like I’d had every type of prego I could ever hope for their menu actually has many other options which I’d love to try in future. One staff member said the salt cod (which comes with crispy potato strips, olive and tomato pate, crispy onions and garlic mayo) was his personal favourite and the soft crab and pork belly options sound incredible too! 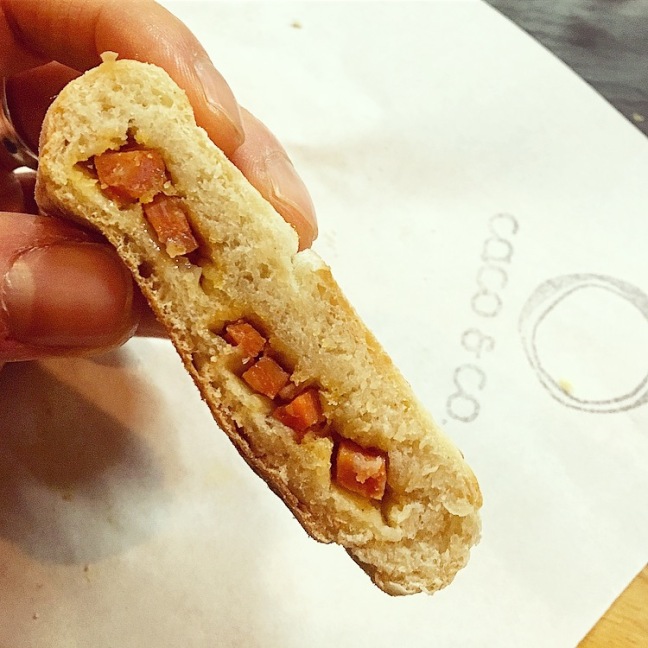 Throughout the night we were spoilt for drinks, from a deliciously fruity, fresh Sangria when we arrived to an incredible range of Portuguese wines and liquor in a mini chocolate cup. I’m not a big drinker but those combined with their signature ‘Passionfruit Poncha’ cocktails and homemade lemonades left me very well hydrated for the night 😉 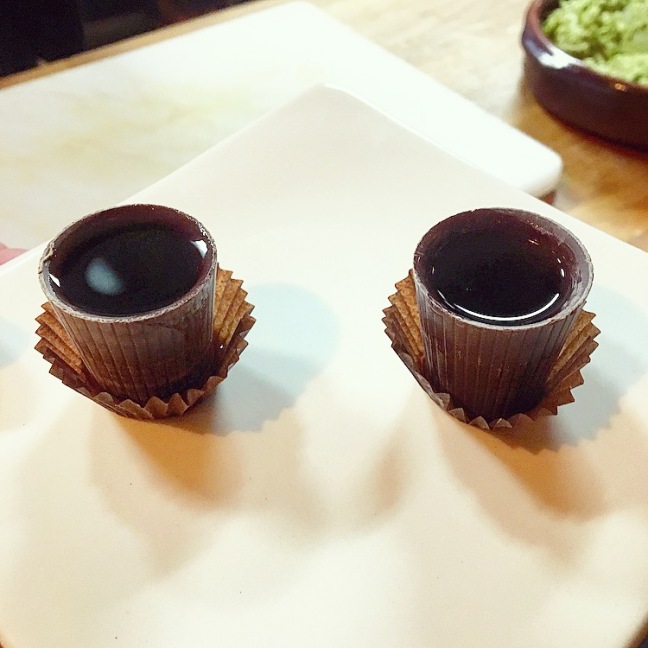 To top off the amazing food, the staff themselves were just incredible. Translated literally, ‘prego’ means ‘you are welcome’ and from the moment we stepped inside we couldn’t have felt more so. They’re actually all from Madeira itself, with smiles so big and personality so upbeat it was infectious. With a clear love for the food and drink itself, they were impossible not to get on with. Brimming with humour, smiles and genuine passion they couldn’t do enough for us – even cooking up extras of all our favourites (as if there wasn’t enough food already!). One guy (their graphic designer) spoke so passionately about Madeira that my friend and I actually decided to spontaneously plan a trip to visit! 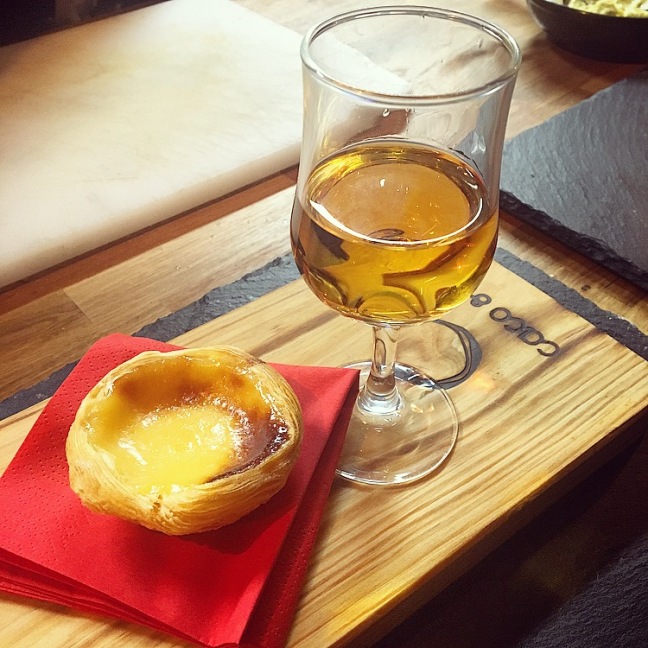 I picked the best friend to go with too – the advantages of going with a true foodie is that they know the priorities. People were milling around the restaurant, sitting at tables and going to refill their drinks. We strategically positioned ourselves by the counter, right next to the chef who was cooking in the open kitchen and we didn’t move all night! We took it in turns to go and refill our drinks on the others’ behalf. And every time there was a fresh prego off the grill (every 2 minutes – we were hosted very, very well!), we were straight in there almost as quickly as the golden pools of delicious garlic butter melted. 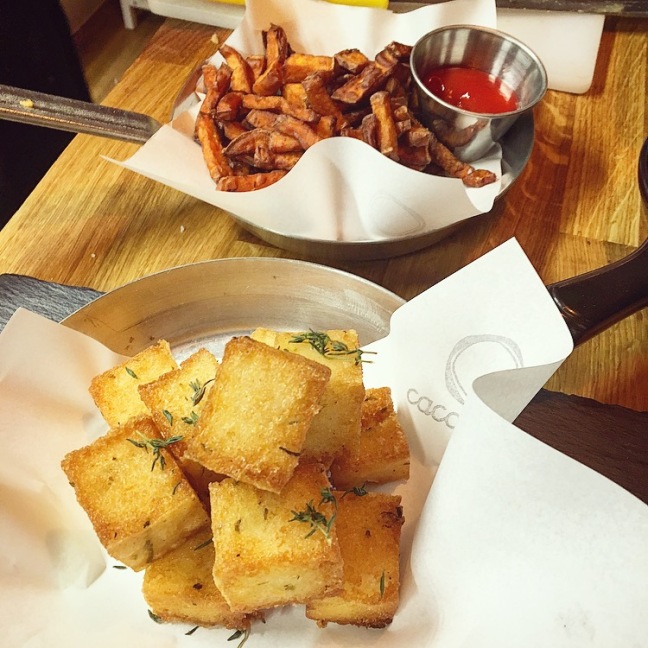 As if that wasn’t enough, to finish off the evening there were whole trays of custard tarts for us to devour. I’ll be honest – they’ve never been something that’s particularly taken my fancy – of course I’d never turn one down (when do I ever turn food down, let alone dessert!?) but I’ve never felt a particular desire to eat them. When presented with a tray of them though, there was no way I was going to miss out, and there’s no doubt that Caco & Co absolutely nail it. My friend loves custard tarts and she confirmed it was incredible. Crisp flaky pastry and a sweet smooth custard filling, perfectly spiced and so light that I could’ve eaten a whole tray of them. Oh wait…. 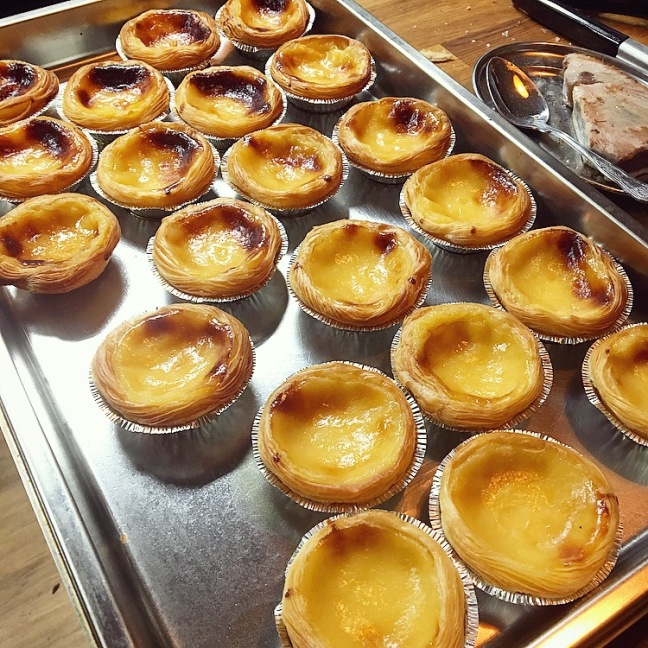 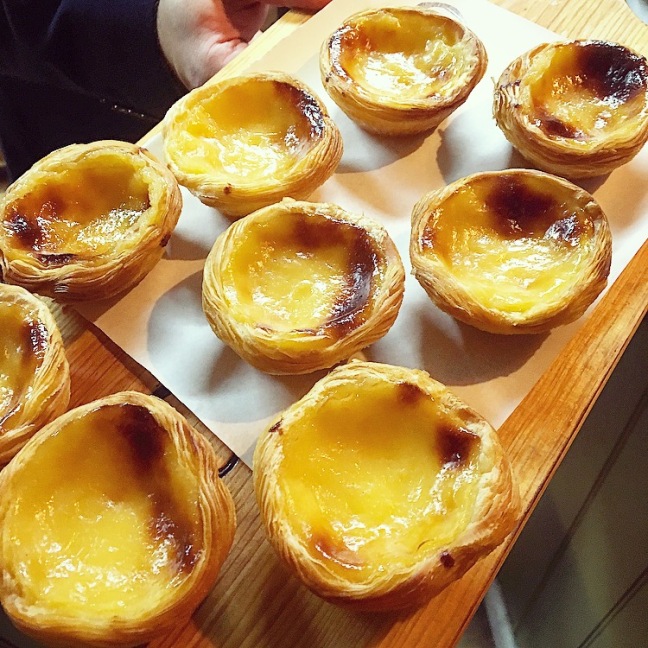 We were chatting away, stuffing our faces, and sampling all the cocktails and before we knew it, the restaurant was empty. As a self-proclaimed Grandma and lover of early nights I cannot remember the last time I was the last person to leave an event but the best company and incredible food and drink meant the night flashed by and before we knew it we were the last ones standing! Such a shame there was no one left to help us finish off the rest of the custard tarts.. 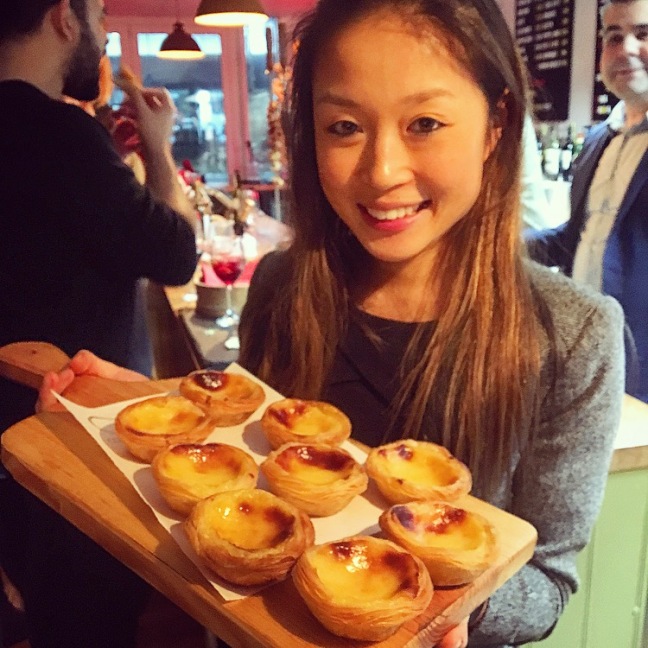 Caco & Co have been kind enough to give me a discount code to share with you! If you pay them a visit the code CacoNIC20 will get you 20% off your bill – valid for the whole of 2018 🙂 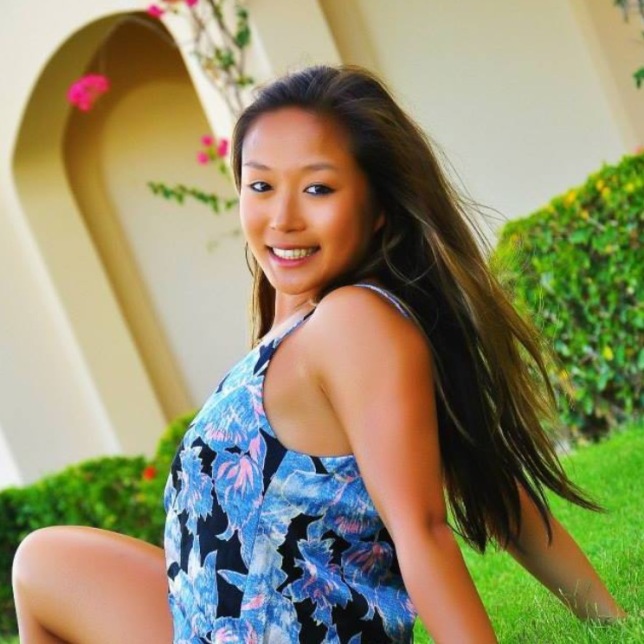 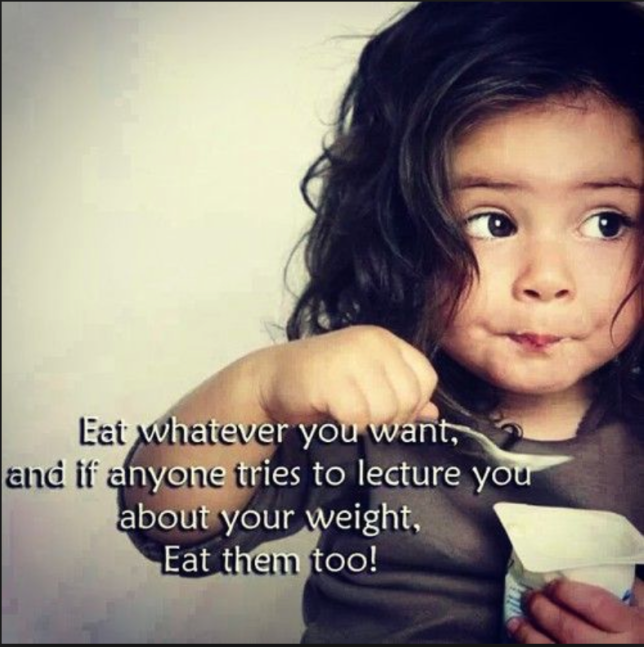